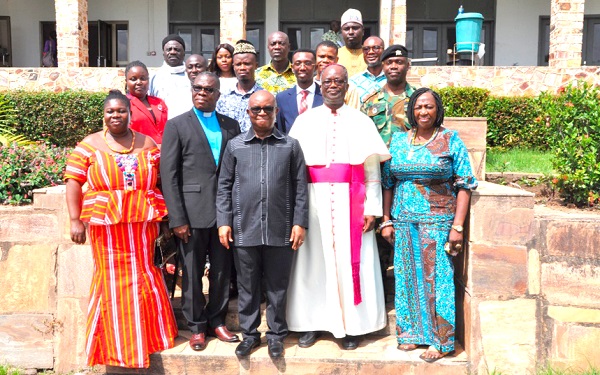 The Catholic Bishop of Ho, Most Reverend Emmanuel Kofi Fianu, has entreated members of the Regional Peace Councils (RPCs) to remain neutral in conflict situations and political matters to gain the trust of the public.

“If we agree that conflict arises due to differences emerging from our divergent views and opinions, then conflict is an undeniable fact of our social existence,” he added.
Most Rev. Fianu made the call at the inauguration ceremony of the13-member reconstituted Volta Regional Peace Council in Ho yesterday.

The Volta Regional Coordinating Council is being represented on the council by the Commanding Officer of the 66 Artillery Regiment, Lt Col. Edward Sarpong Appiah, and the Queen of Ho-Dome, Mama Atrato II.

Most Rev. Fianu, who sworn-in the members, maintained that conflict was essential for society to make meaningful progress because cross-fertilisation of divergent views, opinions and needs could only strengthen society.

However, he pointed out that what was critical was the response chosen in dealing with the conflict.

“More often than not, when we are faced with conflict situations, we tend to forget we were once friends or neighbours

Most Rev. Fianu insisted that it was possible for Ghanaians to appreciate the values of diversity, trust, tolerance and reconciliation, saying that was the work expected of members of the Peace Council.

The Regional Minister, Dr Archibald Yao Letsa, said the region had more than 100 paramount stools and there were communities in which two people held themselves out as paramount chief, adding that such situations were not in the interest of the peace.

Dr Letsa, therefore, urged members of the council to work assiduously to ensure total peace in the Volta Region, to encourage investors to choose the region as their first port of call.

For his part, Rev. Mawutor gave an assurance that the Regional Peace Council would rely and employ the wisdom and strength of God in the discharge of duties, and serve in the best interest of the people without fear or favour.