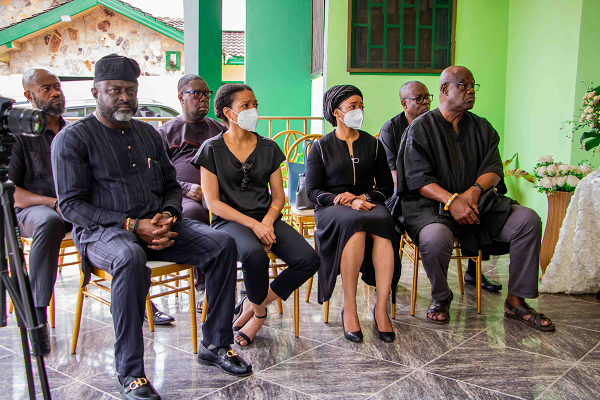 The delegation from the Rawlings' family
30.5k Shares

Former Health Minister, Samuel Nuamah Donkor has been described by the Agyeman Rawlings family as an amazing man and a cadre who stood stoutly by his beliefs and principles.

Speaking on behalf of the Agyeman-Rawlings family during a visit to commiserate with the former Minister’s family, Dr. Zanetor Agyeman-Rawlings, Member of Parliament for Klottey Korle said, “he had a really good heart and he gave everything and impacted on lives that you will never know about. It was shattering news to hear about his loss.”

“There were not that many people that we could count on who we knew, that our dad cared about so much and trusted. He never moved away even when the old man passed. He stayed close and offered his counsel and advise,” said Dr. Agyeman-Rawlings who led the family delegation to the home of the late Samuel Nuamah Donkor in Peduase on Friday.

In a statement issued on September 14, 2022 by the Rawlings' family to eulogise Mr Nuamah Donkor, the Parliamentarian and first daughter of President and Mrs. Rawlings, said Nuamah Donkor was a cadre through and through who suffered for his beliefs but still stood by what he believed in.

“We wanted to move together in rebuilding what we believed in. We spoke about it all but man proposes and God knows best. We wish that the Grace of God will strengthen you,” Dr. Agyeman-Rawlings consoled the late Minister’s wife, children and family.

Former Minister for Information, Fritz Baffour, who was part of the Agyeman-Rawlings family delegation eulogized his former colleague as a true cadre and part and parcel of the political movement that changed Ghana for good.

“He described Nuamah Donkor as one who had given all to his country. “He worked very hard as a minister. He was responsible for some of the big developments in the health sector. When he was made Ashanti Regional Minister, he did his work with diligence, with integrity and was loved very much by the late President Jerry John Rawlings,” Mr. Baffour said.

Fritz Baffour described Nuamah Donkor’s tenure at the State Transport Company as exemplary. He said even the current present government respected his performance and that was evident of the impact he had on everybody, everywhere he worked.

“He was an honest man, a kindhearted man, a very well-spoken man and very eloquent. Please be left with a memory that this is a man who will remain in our hearts and minds as long as we live,” Mr. Fritz Baffour stated.

One of the children of the departed, Samuel Nuamah Donkor, who spoke on behalf of his family, said the family was still in discussions on the date of the one-week commemoration as well as the funeral and will formally inform the Rawlings family when details are finalized. He expressed gratitude for the visit.