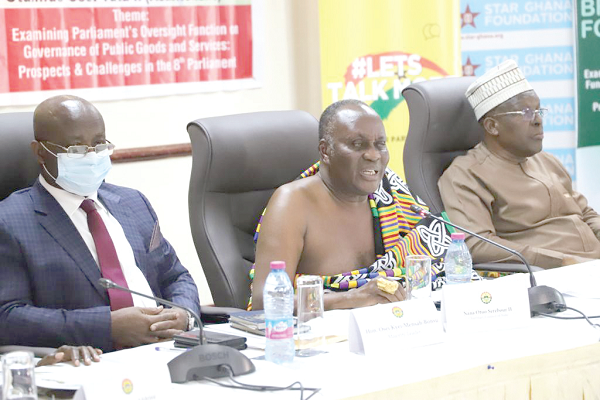 The Chairman of the Council of State, Nana Otuo Siriboe II, has stressed the need to keep Members of Parliament (MPs) who have distinguished themselves in the house as part of measures to address the high rate of attrition in Parliament.

“We need to have strong institutional memory and seasoned law makers,” he said.

According to him, parliamentary work required experienced hands and rued the practice where people tended to clamour for a change of their representatives after a term or two in office.

Nana Otuo Siriboe, who is also the Omanhene of the Juaben Traditional Area, stated the above on behalf of the Asantehene, Otumfuo Osei Tutu II at the Speaker’s Breakfast Forum last Monday in Kumasi.

The breakfast forum was on the theme: ‘Examining Parliament’s Oversight Function on Governance of Public Goods and Services: Prospects and Challenges in the 8th Parliament” and was sponsored by Star-Ghana and Friedrich Ebert Stifung.

He was of the view that in the absence of good draftsmen to help Parliament draft laws, “we need good MPs who have institutional knowledge” to guide the House.

He said the idea of people returning from abroad with some cash just to .contest and become an MP for the fame of it should be discouraged.

“It is a national canker that we all have to sit down and look at,” he said.

Using the last general election as an example, he said Ghana nearly had a president with a minority in Parliament and added that “we should start as people not just thinking about it but doing something and making sure that we accept the reality of creation that God created us differently.”

He said the current hung Parliament “and its implications must be important learning points for everyone interested in the work of Parliament and in democracy in Ghana.

“Never has this country witnessed such political balance in Parliament with equal MPs for both ruling and opposition parties.

“To compound the conundrum, I stand here as the Rt. Hon, Speaker of the 8th Parliament, a person who is not a member of the ruling government,” he said.

“We must prepare ourselves that in future, it is not just only the Speaker... the president himself will have to rely on minority Members of Parliament to govern the country,” he said.

The longest serving MP in the 4th Republic was of the view that it was an opportunity for the country and Parliament to “show that we can work together as one body, united in purpose despite our differences to fight for the common good of our country, our people and institutions”.

“My aspiration as Speaker is to lead the 8th Parliament to actualise this vision and to mould the MP into becoming the real trailblazer of the conducts we hope to see among Ghanaians — unity, patriotism, hard work and service with integrity,” he said.

He said the oversight function of Parliament was to ensure transparency and openness of executive activities, “hold the executive branch accountable, provide financial accountability and to uphold the rule of law.”

That function, according to him, was a mechanism to enhance good governance and accountability and provide checks particularly on the potentially overbearing powers of the executive arm of government.

“This is very crucial for the success of Ghana's hybrid multiparty constitutional democracy whose balancing act tilts in favour of the very powerful executive president,” he added.