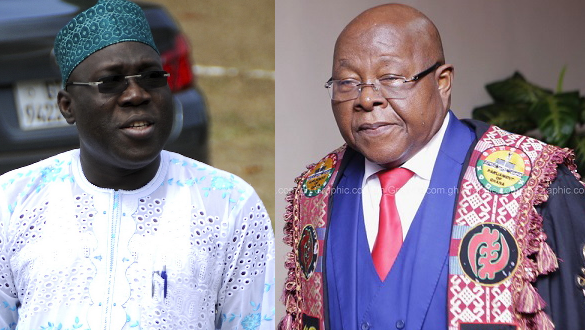 Speaking in an interview with the Daily Graphic in Parliament, he said Prof. Oquaye had projected Parliament as a strong independent institution of state that was not under the “apron strings of the Executive.”

Mr Fuseini, who is currently the Ranking Member on the Constitutional, Legal and Parliamentary Affairs, entered Parliament in 2006 and had served the legislative body under the three previous leadership of Mr Peter Ala Adjetey (2001-2005), Mr Ebenezer Sakyi Hughes (2005-2009) and Ms Joyce Bamford-Addo (2009-2013)

He said Prof. Oquaye stood out as he had demonstrated strong leadership that was accommodating of diverse views of both the Majority and the Minority.

“Prof. Oquaye wants to leave his footprints on the sands of time in Parliament. Many things that are happening presently in Parliament can be directly traced to him. He also wants and has always projected Parliament as an independent institution of state, not under the apron strings of the Executive,” he said.

He explained how the current Speaker would often give legislators especially those from the Minority the opportunity to speak and inform other colleagues of the House.

“Prof. Oquaye has demonstrated that he is a man of his own and takes decisions considering the overriding interest of Ghana. This is why I think that the Speaker is doing tremendously well as compared to some other Speakers I have worked under.

“My overriding assessment is that he is fair and accommodating simply because he appreciates good, informed and well researched contributions, and gives equal opportunities to people to impact on parliamentary debate.

“And so he comes out clearly as my favourite Speaker. I have no doubt in my mind that I have enjoyed working with Prof. Mike Oquaye,” he stressed.

That notwithstanding, he said, some members of the House considered the Speaker as excessively partisan.

“This is expected because he is a member of the New Patriotic Party (NPP), was an MP for the NPP and was a minister of state under former President John Agyekum Kufuor.

“Prof. Oquaye brought the best out of me,” he added.

Mr Fuseini said besides helping to expand facilities in Parliament, Prof. Oquaye deserved commendation for championing the adoption of the proposal for the enactment of the Private Members Bill and efforts to have it passed under his leadership.