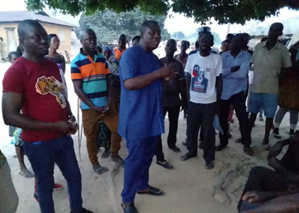 Dr. David Togbe Nfodjo interacting with some of his constituents during his 'Thank you' tour in the Ho West Constituency
30.5k Shares

The New Patriotic Party’s (NPP) parliamentary candidate for Ho West in the 2020 parliamentary election in the area, Dr. David Togbe Nfodjo has embarked on a ‘thank you’ tour in his constituency to express appreciation to the people of Ho West for the overwhelming support he and President Akufo-Addo received from them.

He is also expected to visit communities such as Anyirawase, Tsito, Avenui, Dededo, Seke Kofe, Tsibu, Daffor, Kwanta and Bame in the coming days as part of the second phase of his thank you tour.

For him, even though he lost the elections, he is grateful to the people of the area for the support he received from them, hence the need to officially visit the communities in the constituency to express his appreciation.

In the 2016 elections, the NPP polled 3,385 votes, representing 10.6 per cent in the parliamentary elections.

During the tour, Dr Nfodjo made some donations together with unspecified amount of money to the various communities.

He pledged that he will continue to do his bit to promote the development of the area, stressing that Ho West will see transformation under his leadership and that of the NPP.

He noted that the votes bagged by him and the New Patriotic Party in the area was not as a result of his benevolence or performance, but as a result of their loyalty and commitment towards the "Ho West First" agenda.

Dr Nfodjo further pointed out that the party performed well in the area as a result of the impacts of the social intervention programmes and policies implemented by the Akufo-Addo-led government.

For him, social intervention programmes and policies by the Akufo Addo-led government has resonated well with the people of Ho West.

Dr Nfodjo, who was warmly received in the communities he visited and hailed by the people for his benevolence and commitment towards the development of the area and the country as a whole, urged him to contest again in the 2024 elections.

He was accompanied by the party executives in the area and members of his campaign team.