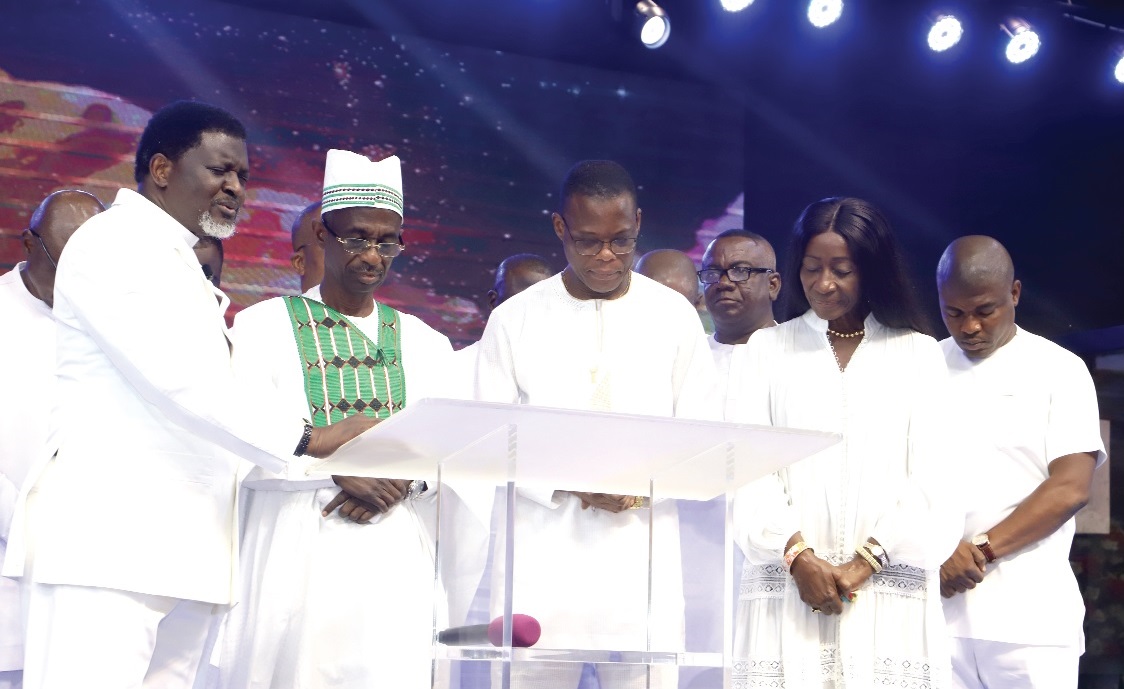 A Joyous team of freshly elected National Democratic Congress (NDC) executive Sunday visited the Perez Chapel at Dzorwulu in Accra to offer thanksgiving to God for a successful party reorganisation exercise that saw the election of new leaders from the branch to the national level.

Led by its National Chairman, Johnson Asiedu Nketiah, the NDC National Executive, who were all elected at the last December’s National Delegates Congress were clothed in white apparel as they were ushered into the church auditorium.

They were accompanied by some elders of the party, including Kofi Totobi Quakyi, Sylvester Mensah and some members of the Minority Group in Parliament, including the Member of Parliament (MP) for Buem, Kofi Adams, and the MP for Ningo Prampram, Sam George.

The party presented GH¢ 20,000 as a thanksgiving token to the church.

The party earlier joined the Muslim prayers at the National Mosque last Friday.

Mr Nketiah donated GH¢ 5,000 to the National Chief Imam and other undisclosed sums to the chiefs and elders of the mosque.

An NDC flagbearer hopeful, Kojo Bonsu, who began his campaign with the erection of billboards and posters around the country, was among the members of the NDC who visited the mosque.

Delivering the sermon, the Founder of the Perez Chapel International, Archbishop Charles Agyinasare, said it was important for Christians to master the act of hearing the voice of God to enjoy a full relationship with him, saying: “We need the voice of the Lord to guard us through this confusing world.”

He said political parties must come up with feasible social and economic policies capable of transforming the fortunes of the country.

Archbishop Agyinasare observed that in the face of the current economic challenges, Ghanaians wanted a paradigm shift in policies; hence, the need for political parties to steer more towards research-based decisions and choices if they wanted to carry the people along.

“Let us be mindful that decisions based on narrow-group interest often cause gross disaffection and internal apathy.

“As we get closer to the next election, we do not need fanciful, unrealistic and ill-research promises just aimed at winning power,” he said.

On peace and unity, he said without the two, countries would struggle to develop as citizens would be compelled to become despondent.

The Perez Chapel Founder added that as agents of development, political parties must always make it a point to consolidate the peace of the country.

“As we move into major campaign activities towards election 2024, all parties must endeavour to maintain the peace of the country.

“No matter what circumstances we find ourselves in, we can only elect our leaders through the ballot and not bullets,” he said.

Archbishop Agyinasare also charged the security agencies to remain faithful to their oath of protecting the citizens.

Also, he urged the leadership of the party to embrace all their positions during the national elections.

That, he said, would help to build a bigger support base for the party.

Archbishop Agyinasare said as the main opposition party, the NDC was a government in waiting; hence, its leadership must espouse better alternatives for the collective benefit of the nation.

Towards the 2024 elections, Archbishop Agyinasare urged the Electoral Commission (EC) to use the Inter-Party Advisory Committee (IPAC) to diffuse tensions through transparency.

When he was given the platform to speak to the congregation, Mr Asiedu Nketiah thanked the Lord for a successful election as the party did not suffer any significant loss that caused a life.

At the end of the exercise, he said the party did not have any option than to thank the Lord for his mercies throughout the exercise which saw more than 47, 000 elections across branches, constituencies, regions and at the national level.

The party, he said would organise another set of 277 elections to elect candidates for all constituencies and also elect a flag bearer who will lead the party towards victory in 2024 and added: “We think that if we thank the Lord, he will shower more blessings and see us through the next phase.”

The NDC Chairman said the nation was in crisis and it needed courageous and fearless men of God like Archbishop Agyinasare who would speak up during perilous times.

He urged the congregation to make informed and prudent choices that would see a better government in power.

“You have control over their choices but choices always came with consequences.

“We pray that we get a government that we need and not the government we deserve because of our wrong choices,” he said.