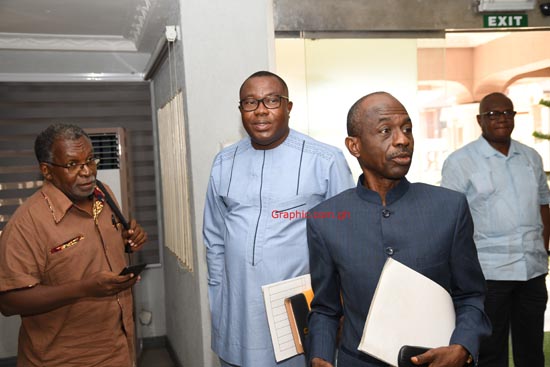 The Council of Elders of the National Democratic Congress (NDC) has met with the leadership of the NDC and its caucus in Parliament at the instance of the Council.

This follows an earlier meeting of the council with the party leadership on Tuesday, 9 March 2021, to discuss issues relating to recent developments in Parliament arising from the approval of some Ministers designate.

The Council of Elders of the NDC met with the leadership of the party and its caucus in Parliament on Tuesday, March 16, 2021.

In a statement, Chairman of the Council of Elders Alhaji Mahama Iddrisu noted that the Council and the caucus leadership collectively agreed that the incident of 3rd March 2021 where some nominees for ministerial positions were approved was “regrettable and unfortunate, and runs contrary to the principles and values of the party.”

According to the statement, the caucus leadership have since pledged to uphold the principles and values of the party in their collective bid to develop the country.

The Council urged the national leadership of the party to resolve issues relating to the caucus leadership in Parliament and called on the rank and file of the party to remain calm, and provide the needed support to the parliamentary caucus in order to hold the Akufo-Addo-led government strictly to the principles of probity and accountability.

The Council expressed confidence that the party will emerge from “this challenges more united and focused to take on the government, as the NDC strives in pursuit of an inclusive Ghana.”