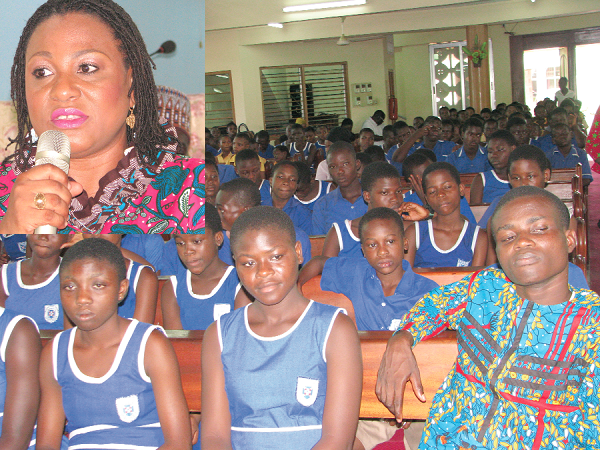 The Chairperson of the National Commission for Civic Education (NCCE), Ms Josephine Nkrumah, has underscored the need to educate schoolchildren on issues of tax.

“We want them to understand that paying tax is the responsibility of all citizens and, therefore, while he or she is growing and starts working, he or she will know that paying tax does not confine to only government workers but every citizen who is working for the development of the country,” she stressed.

At a forum to commemorate the NCCE Constitution/Citizenship Week dubbed: “Our Nation, Our Heritage; Consolidating Ghana’s Democratic Gains,” held in Accra last Monday, the NCCE chair said there was the need to train the children who were future leaders from now to be responsible adults in the near future.

She explained that through the interactions with the children, the NCCE was able to identify the needs of their various communities; and, therefore, it was imperative to consistently engage schoolchildren with issues such as tax so that when they grow up, they may not depart from it.

The Annual Constitution Week celebration is one of the flagship programmes of the NCCE and it is designed to commemorate Ghana’s return to democratic rule in 1993.

This year’s edition corresponded with both the 25th anniversary of the fourth republican constitutional rule and of the NCCE’s existence.

As part of the celebration, which placed emphasis on transparency, accountability and the payment of tax, schoolchildren from 40 schools, including stakeholders, were educated on tax payment and democracy in Ghana.

Ms Nkrumah indicated that the NCCE was going to focus on sanitation in its next programme to help rid the country of its sanitation crisis.

The Municipal Chief Executive (MCE) of the La Dade-Kotopon Municipal Assembly (LaDMA), Mrs Gladys Tsotsoo Mann-Dedey, said as part of the celebrations, there would be an inspection of old trees planted during previous celebrations to ascertain their growth, and also the planting of new seedlings to enhance environmental protection.

“I, therefore, urge all of you to actively participate in this very important exercise as its overall effects on the environment are immeasurable,” she added.

She also urged the schoolchildren to take their education seriously and give of their best since the rewards were immense to themselves, their families, communities and the country at large.

“The assembly has over the years supported the education directorate in ensuring that quality education is delivered in all the schools in the municipality and we will not relent in our efforts to give education the push it deserves,” she added.

For her part, the Municipal Director of the NCCE at LaDMA, Mrs Gloria A. Kudo, called on all Ghanaians, especially the youth, to uphold the rule of law, demand accountability and transparency and ensure dedication to duty to protect the environment and above all keep it clean.

“Be responsible citizens by paying your taxes or levies. All these will form the thrust of our public education for the period,” she added.