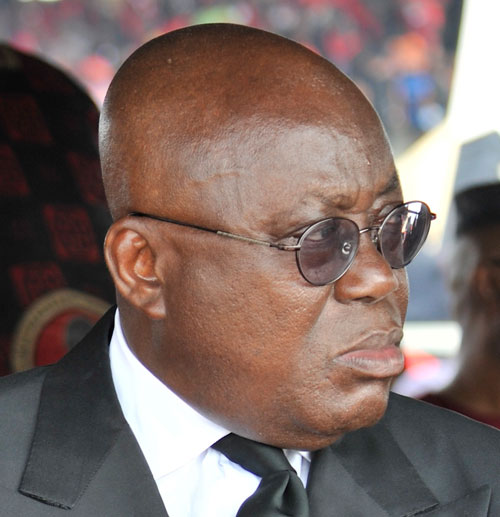 A retired Supreme Court judge, Mr Justice Francis Yaonasu Kpegah, Tuesday filed a suit at the Accra High Court against the flagbearer of the New Patriotic Party (NPP) in the 2012 elections, Nana Addo Dankwa Akufo-Addo, accusing him of impersonation.

Justice Kpegah is suing Nana Akufo-Addo for holding himself as a lawyer when his name was not on the roll of lawyers in Ghana.

In his statement of claim, the retired judge accused former President John Agyekum Kufuor of complicity when his government knew or ought to have known that Nana Akufo-Addo was not on the roll of lawyers, but appointed him as Attorney-General and Minister of Justice who by the provisions of the 1992 Constitution must be a lawyer in good standing.

The statement said Nana Akufo-Addo never signed the matriculation book at the Law School which was evidence of enrolment in an institution and that the defendant was not known to have changed his name neither had he been installed anywhere in the country within the meaning of the 1992 Constitution and the Chieftaincy Act.

According to the statement, the defendant was impersonating W.A.D. Akufo Addo who is on the roll of lawyers as number 1190.

It said Nana Akufo-Addo returned to the UK to read law and was called to the English Bar (Middle Temple) as Number 1190 on the roll of lawyers in Ghana.

The statement averred that the defendant never took advantage of the provisions of the General Legal Council Act which enabled people like Mr R.J.A. Stanley Harvey of Grey’s Inn who was called to the English Bar in 1947 but was specifically called to the Ghana Bar in 1972 to enable him practice in Ghana.

The statement noted that no lawyer in Ghana worth his sort could say that if you were called to the English Bar you could automatically practice in Ghana without being called to the bar.

The plaintiff is therefore seeking a declaration that on a true and proper interpretation of the General Legal Council Act, Act 38 of 1960 (as amended) unless a person is called to the Bar in Ghana and his name entered in the Roll of Lawyers by the body mandated under the said Act 38 (as amended) to regulate the training and certification of persons after a prescribed course of study, that person cannot be deemed competent to practice law in any court of Ghana.

He is also seeking a declaration that the law firm established as Akufo-Addo, Prempeh and Co. at 67 Kojo Thompson Road, Adabraka, Accra is an illegal law firm and thus not competent to represent any party in litigation before any court in Ghana.

He is further seeking a perpetual injunction restraining Nana Addo Dankwa Akufo-Addo from holding himself out as a lawyer competent to practice in the Ghanaian courts or anybody regarding him as such.