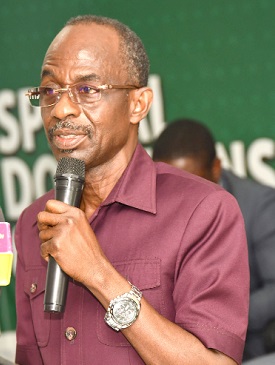 A National Chairman aspirant of the National Democratic Congress (NDC), Johnson Asiedu Nketia, has given the strongest indication yet that he is the man to lead the largest opposition party to recapture power in the 2024 general election.

He said he had no doubt whatsoever in his mind that the party's delegates would give him their mandate to fulfil their desire to see the party return to power to rescue the nation from the bad governance and total maladministration exhibited by the government of the New Patriotic Party (NPP).

Mr Asiedu Nketia, who has been the NDC General Secretary for the past 17 years, said he was clear in his mind what needed to be done to bring the NDC back into government, hence his decision to go for the chairmanship of the party.

He told the Daily Graphic that his interaction with the members of the party during his campaign tour across the country for the national chairman position had been a fulfilling one and he was of the firm belief that he would emerge victorious at the December 17, 2022 National Delegates Congress of the party to be held at the Accra Sports Stadium.

“Ultimately, my chairmanship will result in a resounding victory for the NDC in the 2024 election. That would not only be a political success for the NDC, but it is also, in fact, a national emergency and imperative”.

Touting his achievements, which, he said, pushed him to seek the mandate of the party’s delegates to serve as its chairman, he said it was during his tenure as the general secretary of the NDC that the party acquired its ultra-modern head office at Adabraka in Accra.

He said it was during the same period that the party established the Institute of Social Democracy to deepen knowledge of the party’s ideals as well as the establishment of the Atta Mills library which, he said, was open to all party members and the general public.

Aside from that, he said it was under his leadership as the general secretary of the party that a document detailing the history of the NDC and to an extent the political history of the country was launched.

Mr Nketia said he was also deliberate as general secretary to make the NDC more attractive to the youth by offering scholarships to young people to study for various qualifications.

“We also expanded the regional, youth and women representation of the party by introducing the electoral college of the party,” he said

He said he was leaving the role of general secretary after 17 years to make room for others in the party who had established themselves to take up the mandate.

However, he said the party needed someone with the experience like himself to lead it as chairman to help bring back the party into government.

Mr Asiedu Nketia, affectionately called ‘General Mosquito’ and a cadre, was a member of the Consultative Assembly that drew the 1992 Constitution that ushered the country into the Fourth Republic.

He served as an Assemblymember for Wenchi District Assembly in the then Bong-Ahafo Region now Bono Region from 1988 to 1990 and became the Member of Parliament (MP) for Wenchi West from 1993 to 2005.

He was the Deputy Minister of Food and Agriculture in charge of Crops during late President Jerry John Rawlings government from 1997 to 2001.

Mr Asiedu Nketia was elected General Secretary of the NDC at the national delegates’ congress of the party in December 2005.