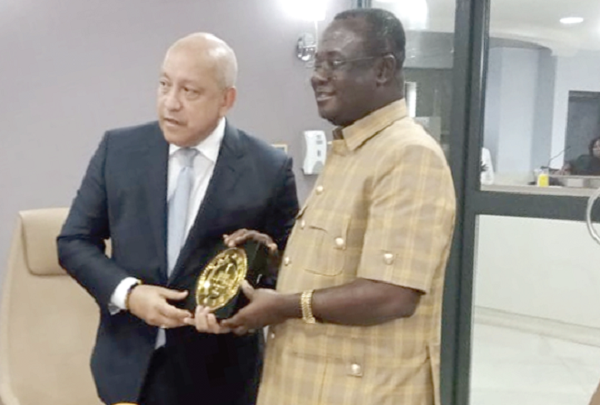 Ghana’s Parliament and the National Assembly of Panama (NAP) have initiated the formation of Ghana-Panama Parliament Association to deepen ties between the two legislative bodies.

The relations seek also to promote business opportunities, especially in the service and agriculture sectors between the two countries for the mutual benefits of their people.

This came to light when a team from the National Assembly of Panama, led by its President and Vice-President, Crispiano Adames and Kayra Harding Bart called on the Speaker and the leadership of Parliament yesterday.

The First Deputy Speaker, Joseph Osei-Owusu, who stood in for the Speaker of Parliament, Alban Bagbin, received the delegation from the NAP and asked the Deputy Clerk of Parliament to see to the actualisation of the association.

The visit is the first by any high-ranking official of Panama to Ghana.

It is to establish a commercial office to promote trade between the two and establish a diplomatic relationship that would conclude in developing the "biggest human solidarity".


Mr Osei-Owusu during an interaction with the team said beyond the official contacts, the ordinary people should feel encouraged to visit one another for businesses to grow.

He said beyond the diplomacy, the two bodies must contact their respective agencies responsible for trade and tourism to ensure a win-win situation.

The First Deputy Speaker urged the visitors to take advantage of the Year of Return launched recently by the government to identify their roots and connect.

The Minority Leader, Haruna Iddrisu, said Ghana must take advantage of the business climate in Panama to export some horticultural produce including mangoes, banana and oranges to the Central American country to make some gains.

He urged the Ghana Export Promotion Authority to work with their counterparts in Panama to explore further opportunities.

Mr Iddrisu called for transparency in some of the dealings of multilateral corporations which hid taxable money in Panama.

He suggested that governments must have access to those monies held in the name of multilateral corporations under the extractive initiative.

For his part, the Majority Leader, Osei Kyei-Mensah-Bonsu, said there was a lot to learn from each other against the backdrop that there were similarities in population, environment and economy to benefit both countries.

He was of the view that the engagement would promote south-south cooperation and enhance the lives of the people of both countries.

Panama is made up of about five million people and it is well known for its canal.

The Panama Canal, a famous feat of human engineering, cuts through its centre, linking the Atlantic and Pacific oceans to create an essential shipping route.