You have delivered on promises -Chiefs tell President Akufo-Addo 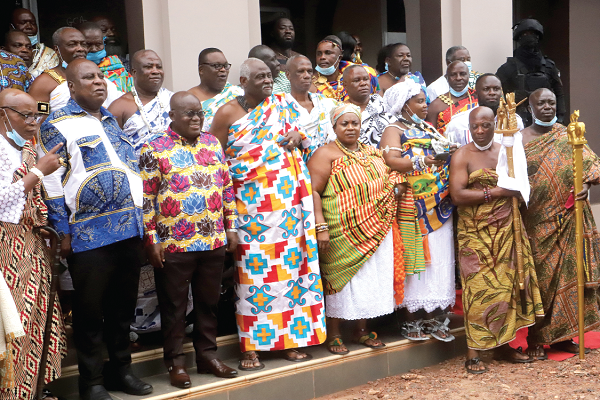 Two traditional leaders in the Greater Accra Region have commended President Nana Addo Dankwa Akufo-Addo for delivering on his promises, with one of them calling for the re-election of the President.

The President of the Greater Accra Regional House of Chiefs, Nii Okwei Kinka Dowuona, commended the President for being faithful to the people while the spokesperson for the Shai Osudoku Traditional Council, Okukrubuor Nene Tei Kwesi Agyemang V, Chief of Dodowa, was blunt that for his unprecedented work, Ghanaians must give President Akufo-Addo another opportunity to lead the country for four more years.

Nii Okwei Dowuona enumerated the various policies that he said had helped in reducing corruption, brought relief to the people and put the country on the verge of progress while welcoming the President to the House of Chiefs.

Okukrubuor Nene Agyemang for his part made the case for President Akufo-Addo’s re-election when the President inspected works at the Dodowa Infectious Diseases Control Centre.

President Akufo-Addo was at the House of Chiefs and the infectious disease centre as part of his four-day working tour of Greater Accra Region.

As part of the fourth day, the President inspected ongoing road construction at Adentan, inaugurated a classroom block at the Legon Presbyterian Boys Senior High School, (Legon PRESEC), and held a durbar at Madina and Abeka Lapaz.

Throughout the trip, he was met by a large crowd, including party supporters, while others stood by the road side and waved.

Nii Okwei Dowuona mentioned some of the policies fulfilled by President Akufo-Addo as the One district One factory (1D1F), Free Senior High School, One village, One dam; digital address system, national identification and the creation of six new regions.

The traditional leader was full of praise for the President for ensuring the peaceful celebration of Homowo.

He said almost all the promises President Akufo-Addo made had been fulfilled to the amazement of even critics of the government.

He said for once in a long while there was abundance of food and he could attest to that because he has a farm at Ofoase Ayirebi.

Based on the President’s achievements, Okukrubuor Nene Agyemang said the President deserved four more years to do more.