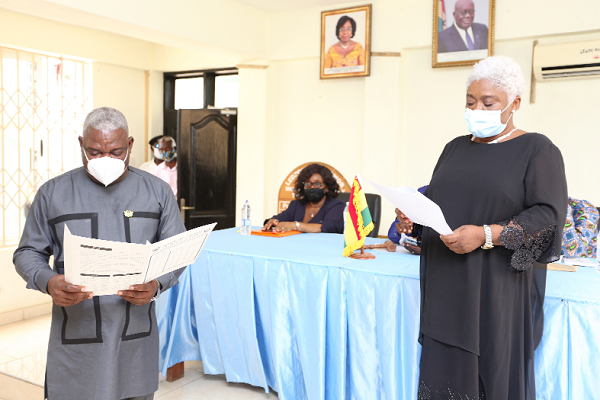 The Member of Parliament (MP) for Ledzokuku, Mr Benjamin Ayiku Narteh, has urged assembly members in the constituency to put aside their differences to help accelerate development in the area.

“Ledzokuku can only develop if we all come together and work towards it. Whether you belong to the National Democratic Congress (NDC) or the New Patriotic Party (NPP), our land can only develop if we come together and work towards it.
Although I belong to the NDC, I consider myself a proud son of Teshie, and I will do whatever it takes to bring development to the municipality,” he said.

Mr Ayiku Narteh, who was speaking at an assembly meeting to induct him as a member of the Ledzokuku Municipal Assembly (LEKMA), emphasised that in unity was strength, and the dream of a well-developed community could only materialise if all members worked together.

"With the elections over, I urge you all to come together to help develop the community and better the lives of the people," he added.

The MP was inducted by the District Magistrate, Madam Sophia Priscilla Yeboah.

The meeting also deliberated on the progress made by the assembly, as well as the challenges facing constituents and how they could be addressed.

Mr Ayiku Narteh sought the assistance of assembly members of the Ledzokuku Municipality to support the education on the COVID-19 pandemic and the need for the people to adhere to the protocols.

He was of the view that if the leaders within the communities got involved in the fight, it would be easier for the people to also buy into the idea and comply.

He mentioned that considering the rate at which the new variant of the virus was causing havoc, it was necessary that all stakeholders came together to tackle it.

Mr Ayiku Narteh appealed to stakeholders to maintain peace and unity for the progress and development of the municipality.

“I also call for broader consultations on unfamiliar subjects. This I believe is the secret to excellent representation of people,” he said.

In her remarks, Mrs Twum-Gyamrah charged the assembly members to discharge their duties devoid of partisanship and asked them to fulfil their roles and promises to the people.

She urged them to prioritise revenue mobilisation and drive the development agenda of the assembly, while expressing optimism in their ability to help the municipality witness rapid socio-economic development.

While congratulating the MP, the presiding member of the assembly urged him to be dutiful and ensure the good of the people and always engage assembly members to help serve the people of Teshie better.