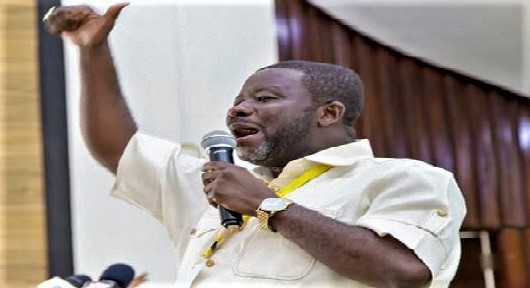 The Director-General of the National Disaster Management Organisation (NADMO), Eric Nana Agyemang-Prempeh, has been elected the President of the National Association of Local Authorities of Ghana (NALAG).

He polled 419 votes to beat three other aspirants, including the incumbent president of the association, Bismarck Baisie Nkum, who had 124 votes, at the 21st Biennial National Delegates Conference of NALAG held at the Kwame Nkrumah University of Science and Technology in Kumasi last Friday.

The other contestants were, Alfred Asiedu Adjei, 398 votes, and Eric Kwaku Kusi, 321 votes.

In a brief acceptance speech that followed his swearing in, Nana Agyemang-Prempeh promised to work with relevant stakeholders to address the issue of people building on watercourses.

“I will set up a committee from NALAG, which will engage the Ministry of Works and Housing, NADMO and the Land Use and Spatial Planning Authority, civil society organisation, among others, to ensure a maximum human face is applied during the implementation phase,” he stated.

According to him, his agenda would start with rebranding the image of the organisation.

“Next is to develop a proper welfare scheme for all assembly members in the country,” he added.

"I wish to assure all here and the nation at large of my quick implementation of the repositioning agenda,” he said

Earlier, addressing the conference, the Vice-President, Dr Mahamudu Bawumia, asked Metropolitan, Municipal and District Assemblies (MMDAs) to stop overdependence on the central government for revenue to develop their assemblies.

He urged the MMDAs to find innovative ways of generating revenue internally than always waiting upon the government.

“Metropolitan, Municipal and District Assemblies should move away from just providing essential services to becoming agents of development by harnessing all natural, material and human resources within their jurisdiction to bring the needed development, create jobs, reduce poverty, increase income levels and raise the needed internally generated funds to complement other sources of funding from central government,” the Vice-President said.

Dr Bawumia urged the leadership and members of NALAG to work with all relevant state and non-state actors to ensure accelerated development at the local level of governance and also apply a mix of innovation, dialogue and collaboration with their peers to speed up the development process.

He assured members of NALAG of the government's commitment to meeting the manpower needs of local authorities, with the expansion of the infrastructure of the Institute of Local Government Studies and the construction of a Local Government University at Akomadan in the Offinso North Municipality in the Ashanti Region.