Military invasion of Parliament: ACEPA calls for sanctions against persons behind 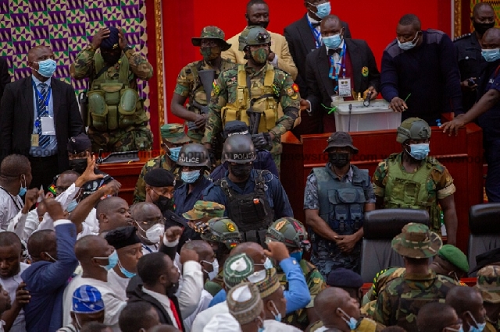 The Executive Director of the African Centre for Parliamentary Affairs (ACEPA), Dr. Rasheed Draman, has called for sanctions against persons who encouraged the military invasion of Parliament on Thursday evening.

A joint military and police personnel moved into the Chamber of Parliament to control some disturbances on the floor of Parliament following disagreements between the NDC and NPP MPs on the election of the Speaker for the Eighth Parliament.

The well-armed security detail, with some having facemasks, came to the floor of Parliament at about 3:30am reportedly on the orders of the former Minister of Defence, Mr Dominic Nitiwul.

The move by the security personnel has however been condemned and questioned by some sections of the public.

Commenting on the development on in a radio interview on Accra-based Citi FM, on Friday, January 8, 2021, Dr Draman said the Military High Command should also be queried for the circumstances that led to the presence of armed military personnel in the House.

“When you see the military entering Parliament, immediately what comes to your mind is that this is another coup. For me, I even blame the military hierarchy. They are there to defend the constitution not to defend the interest of any particular individual. The governments are going to change whether we like it or not. I think our political actors have to be very careful," he said.

He added that “We have to get things done in the right way. So whoever gave the instruction, whoever brought the military in, I believe that some serious action has to be taken because our constitution is clear on situations like this.”

Aside the invasion of the military, there were several disruptions in Parliament including the snatching of ballot boxes and the NDC MPs sitting on the right side of the Speaker to indicate that they were on the majority side of Parliament.