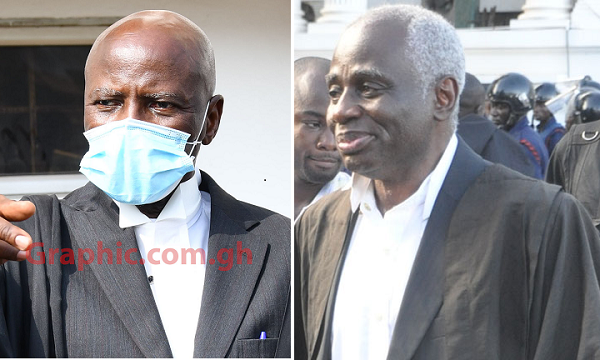 Lawyers for the petitioner and the two respondents in the 2020 presidential election petition have filed their closing addresses, seeking to further convince the Supreme Court to uphold their respective cases.

While lawyers for former President John Dramani Mahama (petitioner) are urging the court to uphold their client’s case, those for the Electoral Commission (EC) (the first respondent) and President Nana Addo Dankwa Akufo-Addo (the second respondent) have described the petition as frivolous and impressed on the court to dismiss it.

Lawyers for the respondents filed their closing addresses on February 17, while the petitioner’s address was filed last Tuesday.

Former President Mahama, the presidential candidate of the National Democratic Congress (NDC) in the December 7, 2020 elections, filed the petition on December 30, last year to challenge the declaration of President Akufo-Addo as the President-elect by the Chairperson of the EC, Mrs Jean Adukwei Mensa.

He is urging the apex court to declare the declaration by the EC as unconstitutional and order a run-off between him and President Akufo-Addo.

In their closing address, lawyers for the petitioner argued that their client had successfully proved that President Akufo-Addo did not win the December 7, 2020 presidential election because no candidate obtained more than 50 per cent of the total valid votes cast, as stipulated by Article 63(3) of the 1992 Constitution.

They argued that the evidence to prove that no candidate won the 2020 presidential election was in the declaration announced by the Chairperson of the EC on December 9.

The petitioner, they said, was not the returning officer for the election and, therefore, he had no obligation to present figures in support of his claim that no candidate won the election.

The petitioner’s lawyers are also calling on the court to take cognisance of the fact that the respondents, specifically the EC, failed to present the Chairperson of the commission, Mrs Mensa, to testify in support of the assertion by the EC that it made an ‘inadvertent error’ in the declaration.

Such a move, they argued, meant that the court could not attach any evidential value to the respondents’ answers challenging the petition.

Lawyers for the EC and President Akufo Addo contended that the petitioner woefully failed to prove his case, arguing that the basis for the petition that no candidate won the election was false.

Such a fact, the lawyers contended, was confirmed by the first witness of the petitioner (Mr Johnson Asiedu), who is the General Secretary of the NDC.

“Apart from the fact that this figure is incontrovertible, the petitioner failed and/or refused to provide any contrary evidence that would establish or at least suggest that the valid votes declared for the 12 candidates were erroneous,” it said.

For the EC, its lawyers argued that the total valid votes that were used to declare a person President-elect were calculated on data from all the polling stations.

“The total valid votes cast is calculated based on data and not based solely on the words of the returning officer. It is especially so when there had been an admission that the figure announced was an error,” the EC added.

Another leg of the closing addresses by lawyers for the respondents is the propriety of the petition.

Lawyers for President Akufo-Addo argued that the petition was not challenging the validity of the election but rather raises the case of how the Chairperson of the EC performed her function as the returning officer of the presidential poll.

That, they contended, meant the petition did not meet the criteria of a presidential election petition, as set out in Article 64(1) of the 1992 Constitution, and, therefore, the petitioner had failed to invoke the jurisdiction of the Supreme Court.

“It is our submission, therefore, that the instant petition properly belongs to the class of actions which can best be described as ‘suits challenging the declaration’, rather than the validity of the election itself,” it said.

Relying on a case Rojo Mettle-Nunoo vs the EC in 2007, lawyers for President Akufo-Addo argued that the Supreme Court held in that case that a challenge to a declaration did not mean the election itself was invalid.

With respect to the EC, its lawyers contended in their closing address that it was clear that the petitioner had failed to properly invoke the presidential election petition jurisdiction of the apex court.