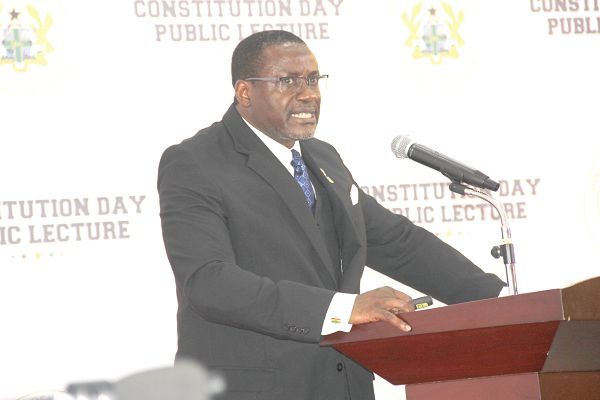 The Rector of the Ghana Institute of Management and Public Administration (GIMPA), Professor Philip Ebow Bondzi-Simpson, has described as unacceptable the failure to complete the constitutional review process.

He stated that since 2012 when the Constitutional Review Commission submitted its report, the country had not seen any meaningful progress in the implementation of the various recommendations contained in the report.

“If we do not like that review exercise as a country, we should tell the people that the politicians set up review and it has gone with their time; if on the other hand we see some merit in the review, the white paper is still a white paper of the government of Ghana,” he stated.

Appeal to the President

Delivering the maiden Constitution Day lecture in Accra last Monday, Prof. Bondzi-Simpson made an appeal to President Nana Addo Dankwa Akufo-Addo to make a difference by setting up a team of experts to finish the processes of the review exercise.

“As the government, our President has the fine opportunity of taking the white paper up and dusting it; where the government feels they will accept the existing white paper it should and where it feels it will not, it is at liberty to vary.

But one way or the other, the review process must be completed,” he stated.

The lecture, on the theme “Constitutionalism in Ghana’s Fourth Republic: Towards Functional Performance”, attracted a number of state officials, including President Akufo-Addo, the Speaker of Parliament, Prof. Aaron Mike Oquaye and ministers of state.

It was also attended by academicians, civil society, Members of Parliament, politicians and students.

Among others, he used the lecture to highlight some of the efficiencies and flaws of provisions in the 1992 Constitution and suggested that steps should be taken to improve the constitutionalism to deepen constitutional dispensation in the country.

Lack of progress on white paper

Prof. Bondzi-Simpson stated that in 2010, former President John Evans Atta Mills constituted the Constitution Review Commission to undertake a consultative review of the 1992 Constitution as part of efforts to entrench the country’s democratic governance.

According to him, since 2012, there had been a government white paper which accepted and rejected certain recommendations of the consultative review process.

Touching on the tenure of boards and councils of tertiary institutions, Prof. Bondzi-Simpson said in the interest of the Fourth Republic, banks, state enterprises, polytechnics, colleges of education and universities should not be impeded from taking serious decisions whenever there was a change of government after elections.

“I know that there are constitutional impediments, the tenure of boards of state institutions should be secured and the businesses of those bodies should continue,” he stated.

Prof. Bondzi-Simpson stated that institutionalising the day was good but it should not be just another holiday for Ghanaians, who he said had been enjoying too many holidays.

He suggested the day should be for sober reflection, public education and “reorienting ourselves to improve upon public service.”

He pointed out that the day’s commemoration should not be limited to public lecturers in the evenings, but it should be preceded at every district with a citizens’ forum at which the chief executive of MMDAs would provide account of activities in their areas over the previous year to the people

“Such forum, facilitated by the National Commission on Civic Education (NCCE), will assemble representatives of students and teachers, media and think tanks and provide a critic of activities in the district over last year.

“And there should be an open forum for citizens and their representatives to ask question,” he said, adding that by commemorating the day in such manner would not allow it to be a holiday particularly soon after Christmas when Ghanaians stayed at home not working and learning.