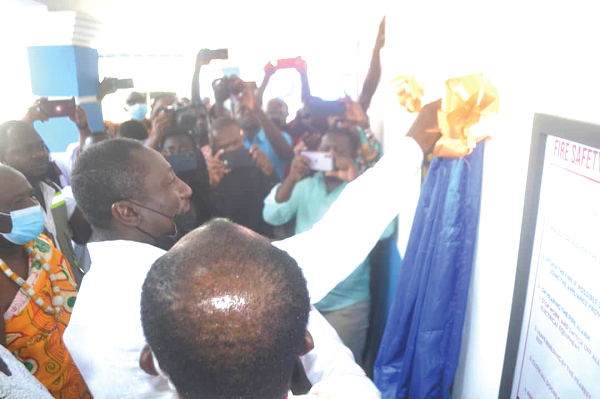 Mr Alexander Afenyo-Markin, MP for Effutu (middle), unveiling a plaque at the ceremony to hand over the building (inset) Follow @Graphicgh

The New Patriotic Party (NPP) Member of Parliament (MP) for the Effutu Constituency in the Central Region, Mr Alexander Afenyo-Markin, has handed over two major projects worth GHȻ2 million to the Winneba Vocational Institute to enhance teaching and learning in the school.

The projects are a well-furnished one-storey block and two learning pavilions to be used as classrooms. They were funded by the MP.

The one-storey block comprises a 60-seater classroom, a fashion workshop, an Information and Communications Technology (ICT) laboratory, a library and offices with sanitary facilities.

The projects were named after the late Nii Commey Abbey, a former District Chief Executive (DCE) for the area, for his contributions to the growth and development of the institute during his tenure.

At a ceremony last Tuesday, to hand over the projects to the management of the institute, Mr Afenyo-Markin, who is also the Deputy Majority Leader in Parliament, commended the government for taking the bold step to decouple the National Vocational Training Institutes (NVTIs) from the Ministry of Employment and Labour Relations.

He noted that such a decision demonstrated the government's commitment and dedication towards promoting the study of vocational and technical education.

The MP said the government had made admission and tuition in NVTIs free so that more young people could be trained to support the country’s industrialisation agenda.

Mr Afenyo-Markin assured the management of the institute of his continuous support towards making it stand out among its competitors, stressing that “such a move will attract more students from all parts of the country to the institute to acquire Technical Vocational Education Training (TVET) skills”.

He appealed to the students of the institute to study hard and make good use of the facilities provided to improve their academic performance, saying: “Now you have no excuse except to study hard to justify the huge investments made in the institute”.

The Manager of the institute, Mr Martin Ekow Young, commended the MP for the timely support and huge investments in an institute which had not seen a lot of developments since its establishment in 1979.

He noted that the projects had come at the right time as they would enhance academic activities in the institute.

He stated: “We are grateful to the MP for giving the institute a facelift in his quest to provide vocational and technical education for students”.

For his part, the Paramount Chief of the Effutu Traditional Area, Neenyi Ghartey VII, lauded the MP for the numerous projects he had executed towards uplifting the image of Winneba and its surrounding towns and villages.