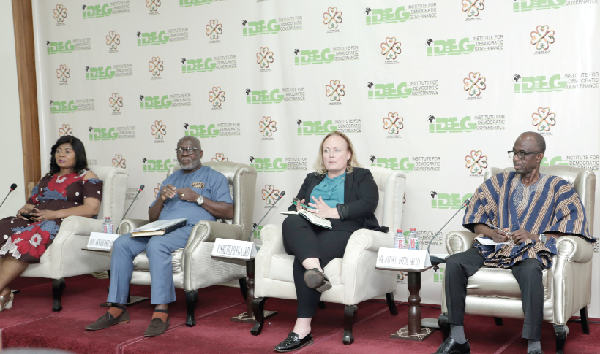 Lisbeth Pilegaard (2nd from right), Executive Director, Danish Institute for Parties and Democracy, making a statement during a panel discussion. With her are other panellists. Picture: EDNA SALVO-KOTEY Follow @Graphicgh

The election of autocratic leaders is threatening fledgling democratic states, especially in Africa.

This was the view shared by speakers at a dialogue on factors contributing to the erosion of democracy in Africa and Europe.

According to them, the emergence of autocratic governments which seek to overstay their terms in office was undermining democracy.

The speakers included the General Secretary of the National Democratic Congress (NDC), Johnson Asiedu Nketia; a lecturer at the Department of Communications Studies of the Ghana Institute of Journalism (GIJ), Dr Lawrencia Agyepong, and a former Minister of Foreign Affairs, Akwasi Osei-Adjei.

They expressed the views at a roundtable on: “Sustaining democracy in the context of erosion: Lessons from Europe and Africa”, in Accra.

According to the speakers, such autocratic leaders often desired to have unbridled control over institutions such as the Judiciary and the Legislature, thereby undermining democratic governance.

Such behaviour, they added, had largely contributed to the frequent coups d’etat that had often destabilised the sub-region, where young people felt let down by their governments for excluding them from the governance process.

“When you have elected autocrats, they attack the very institutions that are supposed to help build democracy and help them deliver the goods.” Mr Nketia said.

He said elected autocrats used democratic institutions, such as the courts, the media, electoral bodies and the legislature, to kill democracy.
“These are institutions that are calibrated in every democracy to regulate the use of power, but these are the very institutions which, when handed to autocrats, begin to compromise and weaken them because they see those institutions as limitations to their power,” he said.

Dr Agyepong, for her part, said many young people, with the help of social media, had grown to appreciate that democracy had failed them, hence the need to mobilise and try to fight the system.

She lamented the environment where the courts were perceived to be working in favour of the government.

Mr Osei-Adjei expressed concern over the way some countries were electing dictators who paraded themselves as democrats but undermined institutions that ensured checks and balances.

“It is the checks that will promote democracy, but where we do not have the democratic institutions to check, then our democracy will be a sham,” he said.

For his part, a Senior Mediation Advisor to the UN, Dr Emmanuel Bombande, called for holistic reforms of the democratic system in the world.