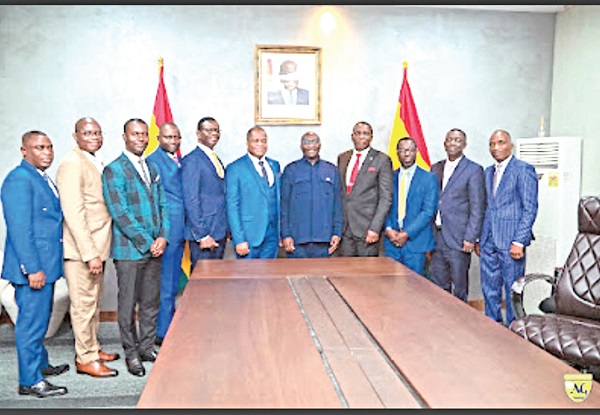 The Vice-President, Dr Mahamadu Bawumia, has called for a bi-partisan approach to fix the prevailing economic challenges in the country.

He said the government was also working assiduously to address the difficulties the people were going through.

Dr Bawumia made the call during a courtesy call on him by the General Superintendent of the Assemblies of God, Ghana, Rev. Stephen Wengam, in Accra.

He expressed appreciation to the church for praying for the country, especially in these trying moments, while urging the clergy to also use the pulpit to preach religious tolerance and unity.

The Vice-President praised the Assemblies of God, Ghana for being the first pentecostal church to use social action activities to evangelise in the country besides investing in the establishment of 350 schools.

He congratulated the newly elected leadership of the church and wished them well.

Rev. Wengam was accompanied by the Executive Presbytery officers and other leaders of the church.

The General Superintendent said that the Assemblies of God had the nation at heart for which reason they always prayed for the progress of the country.

He expressed the confidence that the current negotiations with the International Monetary Fund would crystalise into a successful deal.

“As part of our one-week prayer and fasting programme, prayers were said for the country in all Assemblies of God churches throughout the country,” Rev. Wengam said.

He added that in line with the biblical injunction to pray for the government and people in authority, the church shall continue to lift up prayers until the nation’s economic circumstances improved.

Rev. Wengam, however, appealed to the Vice-President as the Chairman of the Economic Management Team of the government to use his good offices to ensure that individual bondholders and other vulnerable groups were spared the outcomes of any economic measures.

Rev. Wengam commended the Vice-President for his instrumental role in promoting religious harmony in the country.

He said Dr Bawumia’s visit to churches, in particular, and the Christian community in general had made significant impact, adding that in the biblical perspective, it signified living peacefully with all men and women.

Rev. Wengam further described the Vice-President as a role model of peace, especially for countries hit by religious tensions and conflicts.

Meanwhile, Rev. Wengam will be inducted into office on February, 25, 2023.

The event will come off at the Grand Arena of the Accra International Conference Centre, in Accra.

In attendance will be Assemblies of God General Superintendents from Singapore, Tanzania, Liberia, Nigeria, Europe, Togo, Mali, among others.