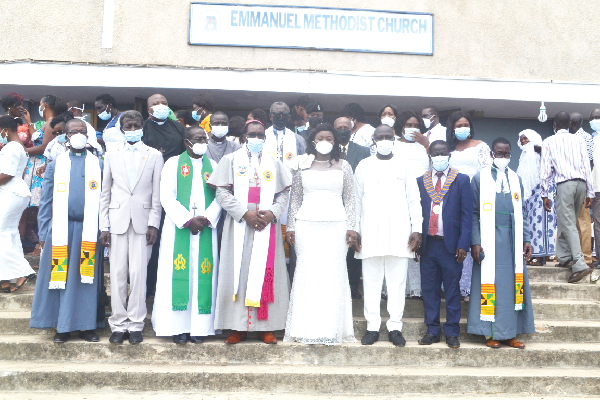 Mrs Justina Marigold Assan (arrowed), Central Regional Minister, together with some members of the clergy after the service
30.5k Shares

“The task given to you is obviously a difficult one and required you to serve to the best of your ability towards the realisation of the vision of the government aimed at bettering the lives of the people,” he stated.

Rt Rev. Brown was delivering a sermon at a thanksgiving service held in honour of Mrs Assan at the Emmanuel Society of the Methodist Church Ghana at Agona Swedru in the Central Region last Sunday.

Be a true servant

Rt Rev. Brown entreated the minister not to depart from the virtues she exhibited during her tenure as the Municipal Chief Executive (MCE) for Agona West since it was those traits that caught the attention of the President which led to her new portfolio.

“I personally know you since your days as MCE as a humble and respectful person and urge you to be a listening leader who will listen and consult more towards the transformation of the region,” he stated.

“Many people may envy your position and may not like you but you should not be disturbed since you find yourself in a human institution,” he said, adding that “rather put your trust in the Almighty God and He will deliver you from the machinations of your enemies”.

Addressing the gathering, Mrs Assan said the nation needed a political atmosphere devoid of extreme partisanship to be able to achieve her desired progress and development.

“I, therefore, call on supporters of both NPP and NDC to show maturity and come together to drive the growth of the region,” she stated.