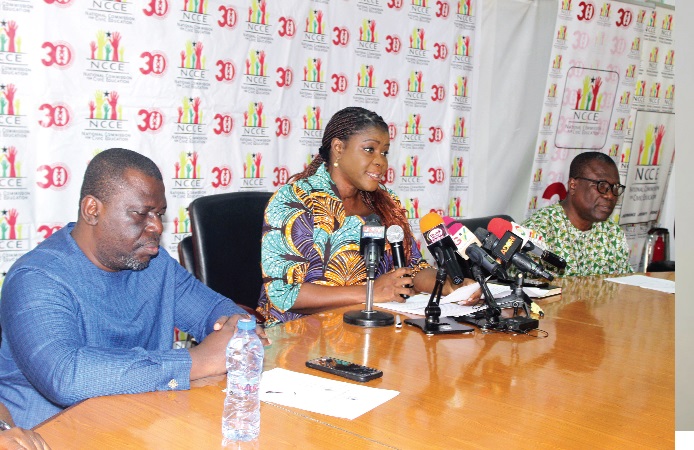 • Kathleen Addy (right), Chairperson of the NCCE, addressing the press. With her is Victor Brobbe, a member of the NCCE. Picture: ESTHER ADJORKOR ADJEI
30.5k Shares

The National Commission for Civic Education (NCCE) has called for decisive action to deal with the increasing monetisation of politics.

It said the phenomenon was one of the tendencies that posed a serious threat to the consolidation of the country’s democracy.

The Chairperson of the NCCE, Kathleen Addy, who made the call, said although Ghana had made strides in democratic governance over the past 30 years, the increasing monetisation of politics had made democracy "very expensive and somewhat unattractive".

"Currently, we are confronted with big issues that range from allegations of vote buying at all levels of internal political party elections to the normalising of demand by the electorate for direct financial and material benefits from elected officials, not to speak of the astronomical cost of running for any political office in Ghana today.

"This phenomenon creates an atmosphere of ‘governance for sale’ and fuels a culture of deepening corruption which, among other things, contributes to increasing vulnerability of the state to violent extremism," she said.

Ms Addy was speaking at a media briefing in Accra last Saturday to mark the country's 30 years of constitutional rule, as well as this year’s Constitution Day.

The event was held on the theme: "30 years of Consolidating Constitutional Democracy: Building National Cohesion through Civic Education and Participation in Local Governance”.

The day was exactly 30 years since the Fourth Republican Constitution took effect in the country, after years of protracted military interventions that disrupted democratic governance.

The late Flt Lt Jerry John Rawlings took office on January 7, 1993 as the first democratically elected President of the Fourth Republic, after he had ruled the country as a military Head of State from December 1981 to January 6, 1993 (11 years).

Since then, the country has enjoyed the longest period of political stability, evidenced by seven successful presidential and parliamentary elections and three peaceful transfers of power from one political party to the other (2000, 2008 and 2016).

She said while touting the country’s democratic credentials, it was important for stronger collaboration among actors in the governance and the political space to stamp out the monetisation of power, as it was inimical to the consolidation of the country's constitutional democracy.

"Ghana is currently facing a very real existential threat, as terrorists who have made significant territorial gains in the countries of the Sahel are looking to expand to the coastal countries of West Africa, and the issue of monetisation of our democracy will increase the country's vulnerability," she said.

Again, she said, the wanton destruction of the environment, primarily through illegal mining activities, was a major threat to the country's democracy.

She noted that if not stopped, the galamsey menace would eventually lead to the breakdown of law and order, the proliferation of arms and the emergence of war lords.

"If we carry on with illegal mining as we are doing now, we will not be far from the debilitating wars fought in Sierra Leone and Liberia in the 1990s. Those wars were fueled by illegal mining through the war lords who were linked with the miners," she said.

Ms Addy also underscored the need for the government to take bold steps to fix the economic challenges facing the country, as failure to do so could affect the peace and stability of the country.

She observed that when, as a result of economic hardships, the citizenry began to feel that the dividends of democracy had eluded them, they were inclined to resort to non-democratic means of survival and self-expression.

"The government must, therefore, do everything in its power to ensure that the economic situation continues to improve to the path of robust growth," she said.

The NCCE Chairperson added that there was the urgent need for state institutions to function properly to engender confidence in the citizenry.

She observed that there was loss of public confidence in state institutions because of the perception of compromise or unfairness.

Among other things, she said, the proliferation of dangerous fake news, political and sometimes religious incitement and abuse of the freedom of speech were dangerous developments that also threatened the country’s democracy.

Ms Addy observed that after 30 years of democracy, it was important for steps to be taken to review the 1992 Constitution to address weaknesses in the governance system.

"The NCCE and many other organisations have undertaken a number of activities designed to discuss these weaknesses and suggest areas for reform," she said.

However, she said, it was important to note that debating the weaknesses of the Constitution did not mean that our democracy was fundamentally flawed and should be jettisoned.

She noted that to maintain a successful democracy, "all citizens must fully engage at all times".

"This means that our media, our youth, our judicial system, our academics, our civil society, our private sector, our security services, our market women, our traditional authorities and every citizenship category must stay engaged and interested in ensuring that our democracy is sustained and our Constitution complied with," she said.