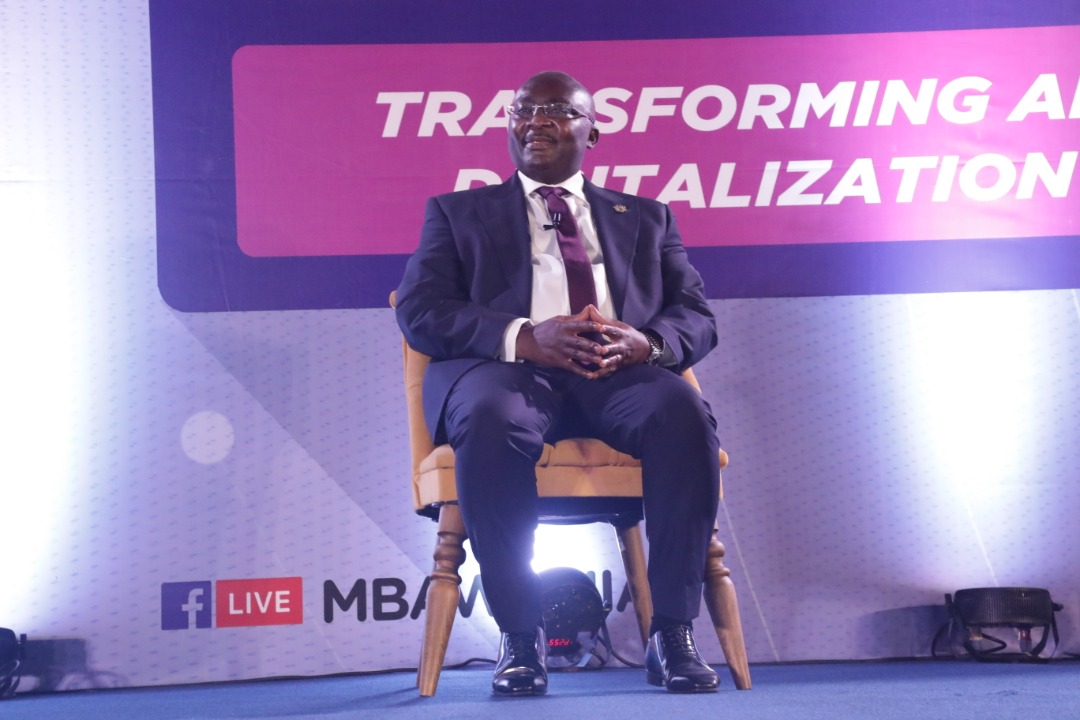 The Vice President, Dr. Mahamudu Bawumia has listed major challenges within the Ghanaian economic and social space, which the Akufo-Addo government has successfully addressed, or is addressing through its digitisation drive.

Delivering a public lecture at the Ashesi University last night on how the government is transforming the Ghanaian economy through digitisation, Dr. Bawumia recalled how the NPP, prior to assuming office in 2017, had identified these problems in the Ghanaian system, and how it envisioned to solve the problems through digitization.

"Our system had major shortcomings and presented challenges for the digitalization of the economy,” Dr. Bawumia noted.

“We were operating in a system where most of the population could not be uniquely identified. It was possible to be born in Ghana, live a full life, die and be buried and there would be no trace of you on any documentation that you ever lived and died in this country,” Dr. Bawumia added to sum up the magnitude of the shortcomings the government has fixed.

Dr. Bawumia spoke extensively about each shortcoming, and provided digital interventions by the government for each of them to address the challenge.

On the issue of lack of unique identification of citizens, the Vice President said the implementation of the biometric national ID cards by the government is addressing this major issue.

“So far, 15.5 million people have been enrolled on the Ghanacard by the NIA and most of the population will be enrolled by 2022. The issuance of the Ghanacard has provided Ghana with a database that will be the anchor for all transactions in the future, providing unique identity to all individuals.”

"With the Ghanacard: the identity of people (even dead people) can be established using their fingerprints," the Vice President said.

On lack of proper address system, Dr. Bawumia said, 'to solve the problem of a lack of working address system in the country, we have leveraged on GPS technology to implement a digital address system for Ghana capturing every square inch of land. In the process, we have identified and provided unique addresses for all properties in Ghana (7.5 million properties)."

“The Land Use and Spatial Planning Authority (LUSPA) has also provided street names and house numbers for every street in Ghana."

Dr. Bawumia described Ghana’s property address system as unique, because Ghana is the first country in Africa to implement a digital system in combination with house numbers and street names.

“It is a superior  address system and leapfrogs the addressing systems that have been implemented and in use in many advanced countries,” he added.

Dr. Bawumia said one of the biggest problems which was  impeding financial sector development in the country was financial exclusion. He said most of the population were excluded from fully participating in the financial system because they were unable to open and operate bank and financial services accounts - a problem he said reinforced the dominance of cash payments.

“When we assumed office in 2017, we decided to use digitization to solve this problem. The data showed that 70% of people in Ghana had no bank accounts but 80% of the adult population had mobile phones with 30 million mobile money accounts,” Dr. Bawumia said.

“Thanks to the Bank of Ghana and Ghana Interbank Payments and Settlement System (GhIPSS) the mobile money payments interoperability has made it possible to transfer money seamlessly across different mobile money providers and between bank accounts and mobile wallets.”

The Vice President further noted that Ghana is the the first country in Africa to implement ineroperability between bank accounts and mobile wallets, describing it as “no small feat, especially at the cost we did it.”

Digitization of government service to improve efficiency and reduce corruption

Dr. Bawumia noted that hitherto, service delivery in the public sector was replete with so many bottlenecks including delays, long queues and bribery and corruption.

But with the implementation of digitization, he added, government services such as applications for scholarships, passports and drivers license, services at the ports, registrar general department, renewal of national health insurance cards, motor insurance, among many others, have all been digitized, thus making it easier for citizens to access these services and make payments through their mobile phones, and on government’s integrated digital platform, the Ghana.gov.

On the issue of domestic revenue, Dr. Bawumia noted that a number of digital initiatives have been undertaken, which include designating the Ghana Card number as tax identification numbers, provision of digital address system, financial inclusion, formalisation of the informal sector, digitization of the processes of filing taxes, etc.
These, he said, have contributed significantly in broadening the tax net to aid revenue mobilization.

"A significant driver of high interest rates in Ghana is the level of risk associated with lending. The issues that pertain to risk include the absence of a unique identity for the population and the lack of an address system," Dr. Bawumia observed.

With the implementation of a unique identity and providing unique addresses for properties, lending rates, the Vice President noted, should come further down, having already been down due to the central bank's "excellent monetary policy stance."

Dr. Bawumia also spoke extensively on how the government's digitization drive is improving efficiency in the health system through digitization of hospitals and medical records, digital renewal of national health insurance, delivery of medical supplies to rural communities through drones, among others.

The provision of thousands of CCTV's to the Ghana Police Service, with three networked national command centers in Accra, Kumasi and Tamale, is another digital intervention, which Dr. Bawumia listed as improving safety of citizens.

Finally in the education sector, the Vice President stressed on how the government has provided free WiFi to senior secondary schools as well as some tertiary institutions, to improve teaching and learning.

He also spoke about the provision of free special-feature laptops to all teachers on Ghana to enable digitally access text books and course outlines directly from their lap tops.