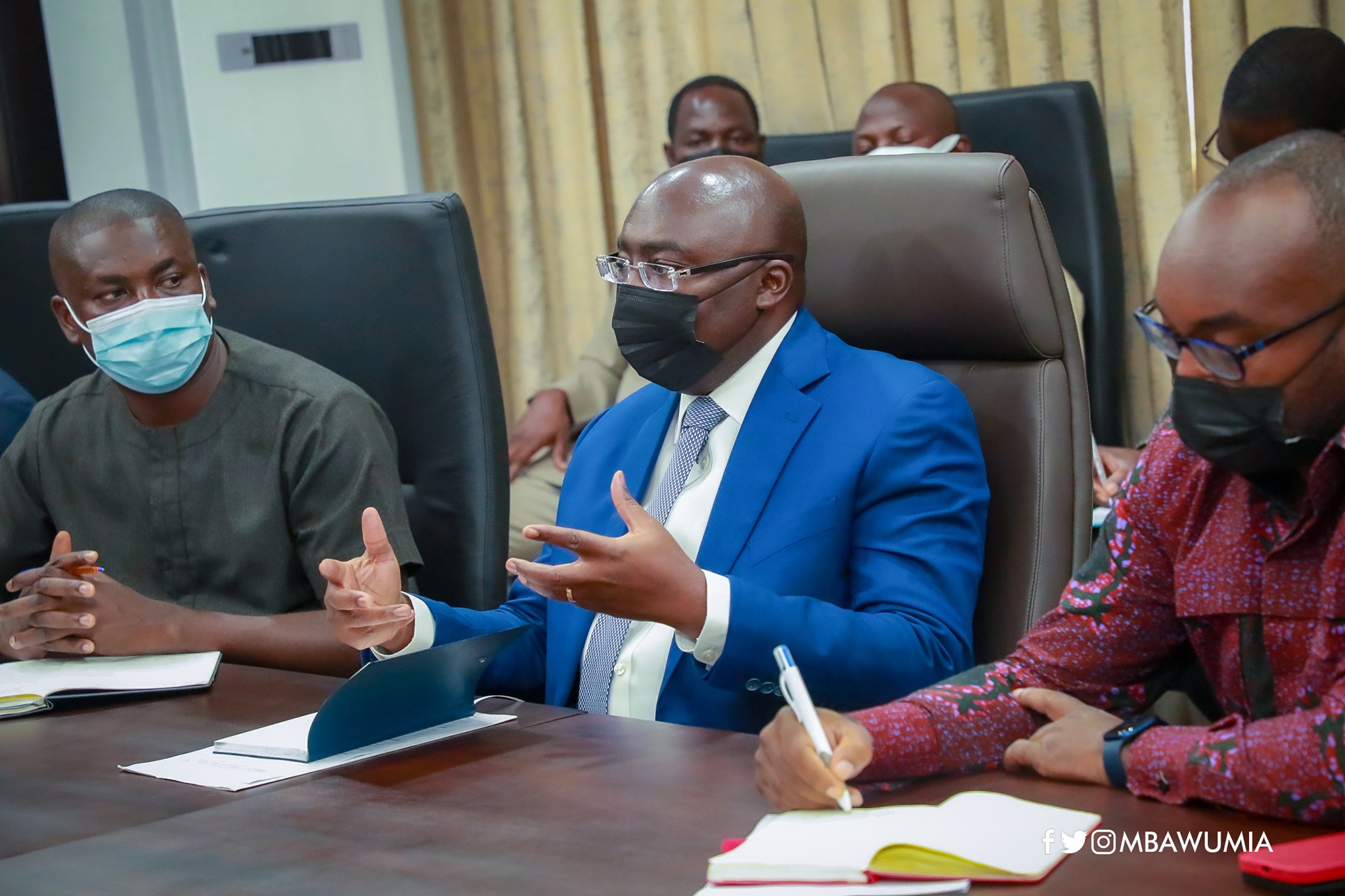 The Vice President, Dr. Mahamudu Bawumia has given a firm indication of a take off by the Akufo-Addo government to implement its second term vision after the approval of its first second term budget.

Parliament last week approved the 2021 Budget and the House is expected to finalise the appropriation bill on Monday to pave way for the government to take off.

"Dear Friends, as we look forward to the implementation of the 2021 budget in our second term, it is important that we take note of the accomplishments of the Nana Akufo-Addo government in our first term after inheriting an economy in crisis. Here are some:," Dr. Bawumia wrote on Facebook on Sunday.

He then went on to list all the major first term accomplishments in different sectors.

"Notwithstanding these solid achievements, there are still challenges facing the Ghanaian economy and Ghanaians following the impact of the COVID-19 pandemic and I look forward to working with President Akufo-Addo to address these challenges and deliver on his vision to transform and modernize the economy for the benefit of all Ghanaians in our second term," Dr. Bawumia wrote.

Below is the list of accomplishments as posted by Vice President Bawumia:

3. The average exchange rate depreciation over the last four years (7.3%) is the lowest for any first term government since 1992. The year 2020 recorded the lowest rate of depreciation in the last 28 years.

4. Cleaned up the mess in the financial sector that we inherited and saved the deposits of 4.6 million depositors.

5. Ghana has been consistently one of the fastest growing economies in the world for each of the last four years. notwithstanding the decline of GDP growth to 0.9% in 2020 as a result of COVID-19.

6. For the first time in over two decades, the trade balance (the difference between what we export and what we import) recorded a surplus for four consecutive years from 2017-2020.

9. Ghana’s sovereign credit rating upgraded from B- in 2016 to B with a stable outlook. First upgrade in 10 years

10. Planting for Food and Jobs has increased food production. It has led to a 71% increase in the national production of maize and 34% in paddy rice.

11. The Global Food Security Index, which measures affordability, availability and quality of food across 113 countries, placed Ghana in 59th position in 2019, up from 78th position in 2016.

12. Introduced a pension scheme for cocoa farmers. The first such scheme since independence.

14. Implemented the One District One Warehouse initiative

15. Implemented One District, One Factory Initiative. In four years, 76 companies are in operation under 1D1F.

16. The new Automotive Sector Development Policy has resulted in VW, Sinotruk, Kantanka Group, and Nissan all assembling vehicles in Ghana.

19. Recruited nurses, doctors, and other healthcare workers, teachers, police officers, and many others in the public sector after many years of employment freeze under the previous Government. At least 550,000 public sector workers recruited.

22. Cumulatively, we reduced electricity tariffs for residential, business, and industrial consumers during our first term; the only government in the fourth republic to do so.

24. Restarted the operations of Anglogold Ashanti’s Obuasi Mine, the Ghana Publishing Company, WAMCO, as well as GhanaPost with attendant job creation.

25. We have enrolled 15.5 million people on the biometric National ID card (Ghanacard) scheme.

26. We have implemented a digital address system capturing every square inch of land or water in Ghana.

27. Implemented the ground breaking Mobile Money interoperability (MMI) project. Ghana is the only country in the world that has thus far implemented our version of MMI.

29. Ghana is the first country in the world to implement a Universal QR Code payment system that accommodates both bank accounts and mobile wallets.

30. We have made it easy for people to renew their national health insurance membership on their phones without having to spend precious time in long queues.

31. ECG customers can now easily buy pre-paid electricity units conveniently from wherever you are from your mobile phone.

32. The online passport application processes are helping many people and making it easier to obtain a passport.

33. Digitization at the port, elimination of long room, and streamlined inspections and enhanced enforcement has made it easier to clear goods and curbed corruption in the process.

34. Following digitization at the Scholarship Secretariat, everyone is able to apply for scholarship and receive same in the comfort of his or her home via online applications.

36. We have implemented the digitization of Motor Insurance Database. All insurance policies, which now have key security features, have been synchronized to a national database, which can be accessed simply with any mobile phone by the insured, the police, and the public.

37. We have digitized the operations of DVLA and today our citizens have a much more convenient and easy way to acquire their driver’s license and register their vehicles.

38. We have started automation of our hospitals and we have seen efficient and improved service deliveries at hospitals that we have implemented this. The goal is to go paperless in all hospitals within two years.

39. We have completed the infrastructure to provide free Wifi to all 722 senior high schools, the 46 Colleges of Education, 260 district education offices, and an initial successful pilot of 13 public universities.

42. By making the National ID number the SSNIT number, we have increased the number of people with SSNIT numbers from 3 million to 15.5 million

43. The National Health Insurance number is now your Ghanacard number

44. The digitization of the births and deaths registry is 80% complete

49. Abolished the 17.5% VAT/NHIL on financial services

50. Abolished the 17.5% VAT/NHIL on selected imported medicines, that are not produced locally

52. Abolished import duty on the importation of spare parts.

55. Introducing a new basic curriculum from kindergarten to primary six with a focus on reading, writing, arithmetic and creativity (the 4Rs)

56. Government is now paying the examination registration fees of BECE and WASSCE candidates

57. Teacher training allowances have been restored

58. Nursing training allowances have been restored

61. Introduced drones in the delivery of critical medicine, vaccines and blood to people in remote parts of the country. Ghana has now the largest medical drone delivery service in the world.

62. SSNIT pension can now be received within 10 days of application

64. We have expanded the Livelihood Empowerment Against Poverty (LEAP) programme by 53%

67. Abolished the 3-month arrears policy for teachers who had worked 2-3 years

70. Established the Zongo Development Fund to address the needs of Zongo and inner city communities.

71. Increased the allowances for peacekeeping soldiers from $30 to $35

72. Increased the share of the DACF to persons with disabilities by 50%

73. Implementation of our pledge of employing 50% of the persons who manage the country’s toll booths from amongst Persons with Disabilities.

75. Establishing a Ghana Commodities Exchange –
76. Launching a comprehensive Building Code for Ghana for the first time- ;

77. Implemented one village one dam and constructed over 400 dams

79. Not a single case of cholera in Ghana in the last four years.

80. The massive investment in water and sanitation facilities in many rural and deprived communities by our government has resulted in over 5400 communities being declared open defecation free (ODF)

81. The largest investment in infrastructure (roads, railways, schools, etc.) for any first term government in the fourth republic (www.deliverytracker.gov.gh)

82. Improved the financing of governance and anti-corruption MDAs like the Ministry of Justice and Office of the Attorney General, NCCE, CHRAJ, EOCO etc.

83. World class leadership demonstrated by President Akufo-Addo in the management of COVID-19. Notwithstanding the impact of COVID-19, inflation, interest rates and exchange rate depreciation are much lower today than they were in 2016!

84. Long running chieftaincy dispute in Dagbon has been solved against all odds.

Notwithstanding these solid achievements, there are still challenges facing the Ghanaian economy and Ghanaians following the impact of the COVID-19 pandemic and I look forward to working with President Akufo-Addo to address these challenges and deliver on his vision to transform and modernize the economy for the benefit of all Ghanaians in our second term.