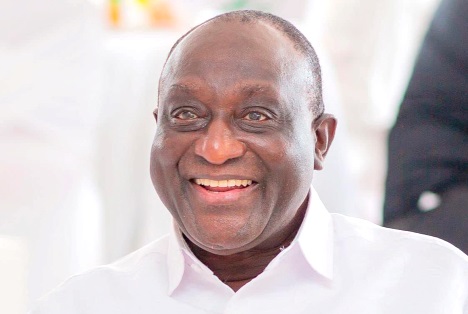 Outgoing Minister of Trade and Industry, Alan Kyerematen, who is seeking to become the flag bearer of the New Patriotic Party (NPP) in the 2024 elections, has unveiled a national development plan for the country, dubbed: the Ghana Transformational Plan (GTP).

The seven-point plan, among other things, seeks to provide a strong macroeconomic environment, a new agricultural revolution (NAR) for the country, industrial transformation, digital mainstreaming, energy security and diversification, decarbonisation and climate resilience.

These were contained in a presentation he made yesterday which was broadcast live across a number of radio and television channels.

Earlier, he had expressed his appreciation to President Nana Addo Dankwa Akufo-Addo for appointing him to serve in his government for the past six years.

He said he and the President were good friends who had contested the flagbearership of the NPP on several occasions but soon after they worked together.

Touching on agriculture, Mr Kyerematen said the NAR would be based on five critical elements, including optimising value to farmers by the establishment of farmer-owned large-scale commercial farms and processing facilities to bring the full benefits of the agricultural value chain to farmers.

It would also introduce technology and innovation into agriculture through research and development in agronomy, mechanisation, irrigation and plantation management.

That, he said, would build on the foundation laid by the Planting for Food and Jobs and Planting for Export and Rural Development (PERD) programmes, adding that farmers could not be competitive without technology and innovation.

The NAR, Mr Kyerematen added, would also lead to the establishment of licensed food distribution and marketing companies by the private sector throughout the country at the district level, to be supported by the government.

The companies, he added, would constitute a vital link between farmers and the market in the urban and peri-urban areas, which would be complemented by the introduction of digitalised food distribution and marketing online platforms to connect producers to buyers and consumers.

“It will also strengthen the Ghana Commodity Exchange as the marketplace for all actors in the agricultural value chain, deepen the current regime for lending and financing for the agricultural sector and enhance the de-regulation of the cocoa sector by deepening private sector participation in the buying and marketing (including export) of cocoa,” he stated.

Mr Kyerematen said the agricultural revolution would also create mass citizens’ participation in agriculture by introducing an ‘Operation Own a Farm’ programme.

On industrial transformation, he said, it would build on the successes of the government’s 10-point Industrial Transformation Programme, including the One-District, One-Factory (1D1F) initiative and the establishment of strategic anchor industries to diversify the economy beyond cocoa and gold.

Mr Kyerematen cited automobile assemblying, garment and textiles, pharmaceuticals and the petrochemical industry, enhancing the growth and development of small and medium enterprises, the establishment of industrial parks and special economic zones and supporting domestic retail trade and distribution to buttress that point.

Under accelerated infrastructure development, the outgoing minister said there would be the promotion of private sector financing for public infrastructure such as roads, railways, ports and harbours, water supply systems, public housing and so on, which would reduce the government’s exposure to the financing of such infrastructure projects.

He also rolled out plans for digitalisation, ensuring energy security and diversification, with a pledge to overhaul the local government architecture.

“The execution of the GTP will require our collective efforts, irrespective of political orientation, ethnicity or religion. It will lead to a new dawn of restoration, rebuilding and reward,” Mr Kyerematen said.

He called on the citizenry to invest in their own future by supporting his campaign to be heralded by the launch of a mass fundraising initiative: “Ketewa biara nsua” and “Adopt a Constituency Initiative”, which would afford Ghanaians from all walks of life the opportunity to be part of his campaign.