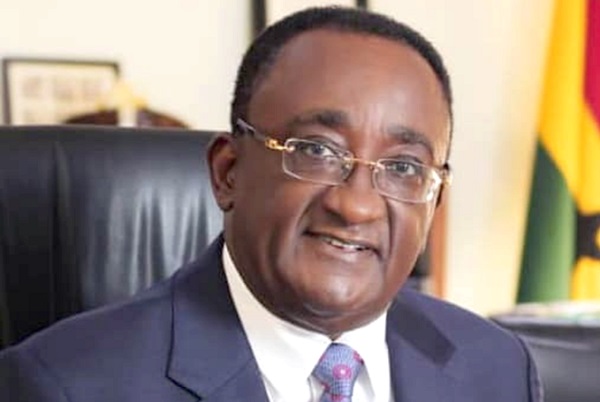 The Minister of Food and Agriculture, Dr Owusu Afriyie Akoto, has tendered in his resignation. He presented the resignation letter yesterday evening after addressing a staff durbar at the ministry to thank them for their support in his six-year tenure at the ministry.

As of the time of filing this report, Dr Akoto was at the Jubilee House to present his resignation letter to the President, our sources indicated.

His resignation, which is to enable him to concentrate on his presidential ambition, however, takes effect from January 24, this year, according to sources familiar with the matter.

He is the second minister of Cabinet rank to resign in the last four days, following the resignation of the Minister of Trade and Industry, Alan Kyerematen, last Thursday evening, also for the same reason.

Dr Akoto is hoping to clinch the flag bearer slot of the New Patriotic Party (NPP) for the 2024 presidential election.

At the durbar at the forecourt of the ministry, the outgoing Minister of Food and Agriculture called for collaboration between officials in the ministry and farmers in order to deal with food security issues in the country.

Dr Akoto noted that it was his dream that a time would come in the history of Ghana when food would be in abundance.

"Let us help farmers of this country, so that Ghana can be more secure for agricultural activities and policies to thrive, which will translate into solving food security challenges in the country,” he said.

Present at the durbar were the deputy ministers of Food and Agriculture, Alhaji Mohammed Hardi Tufeirua and Yaw Frimpong Addo.

"To everybody, from the cleaner to the gate man to the directors, I'm ever grateful to you for supporting the work of this ministry. I am always proud to say that in this ministry, we have an assembly of highly qualified experts.

“It is no doubt that a lot of energy was needed to achieve the objective of the ministry last year, but you came through. Thank you," he told the staff of the ministry.

Dr Akoto has held the portfolio since 2017 and is credited with the introduction of programmes such as the five modules of the Planting for Food and Jobs, the Rearing for Food and Jobs, the Planting for Export and Rural Development, the Mechanisation and the Greenhouse Technology as well as the recruitment of 6,000 agricultural extension officers to beef up the system and the recruitment of more than 1,000 veterinary doctors, which is ongoing.

During his tenure, the contribution of the agricultural sector to Gross Domestic Product (GDP) increased from 20.1 per cent in 2016 to 21.7 per cent in 2021, before sliding marginally to 19.9 per cent last year, mainly due to the government’s inability to fund the fertiliser subsidy.

Through his initiative, measures taken by the government to address major marketing problems in the agricultural sector include the construction of 80 warehouses of 1,000 metric tonne capacity each for food storage and to reduce post-harvest losses.

These vegetables are sold to high-end shops, such as the Palace Mall, Shoprite, Starbites, KFC and Burger King in Tema, Accra and Kumasi.

He worked as an Economist, Senior Economist, Principal Economist and Chief Economic Advisor over a period of 18 years at the International Coffee Organisation in London, the UK.

Dr Akoto has also worked as a consultant to the World Bank and the United Nations on soft commodities (cocoa, coffee and sugar).

Between 1995 and 2007, he was the Chief Executive Officer (CEO) of two international commodity companies, Goldcrest Commodities Limited and Plantation Resources Limited, both based in Ghana.

He was for two terms the Member of Parliament for Kwadaso in Kumasi, Ashanti Region, starting from 2009.