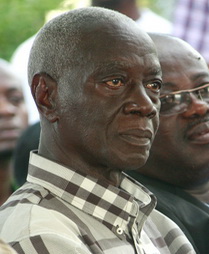 has admitted to several instances of double registration in the register of voters used for the 2012 general elections.

His admission follows a submission of a list of 51 such instances by Mr. Philip Addison, counsel for the election petitioners challenging the outcome of the presidential election which returned President John Mahama as the winner.

Mr. Addison is continuing his cross-examination of the EC Chairman at the Supreme Court.

Dr. Afari-Gyan, the sole returning officer for the presidential poll, had previously told the court that the use of the biometric registration and verification system had helped to improve the conduct of elections, specifically in helping to prevent double registration and impersonation.

He had also said that the 2012 election was the most transparent of all six elections he had superintended in the country. Ghana has had general elections (Presidential and Parliamentary) since returning to constitutional rule in 1992.

The NPP presidential candidate for the 2012 elections, Nana Akufo-Addo, his running mate Dr Mahamudu Bawumia and NPP chairman, Jake Obetsebi-Lamptey have petitioned the Supreme Court to annul over 4.5 million votes for alleged irregularities and malpractices and consequently overturn the declared result in favour of Nana Addo.