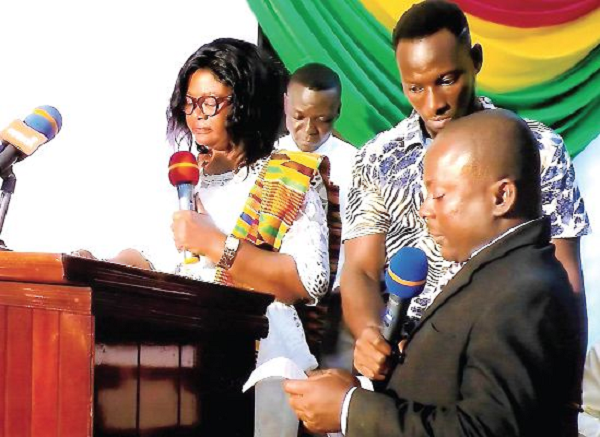 The facility, comprising six classrooms, an office, a store and a computer room, was financed by the Ghana Education Trust Fund (GETFund) to replace a dilapidated structure which was being used by the pupils.

Before the inaugural ceremony, the MCE presented 60 dual desks, seven each of teachers’ tables and chairs to the school, as well as 120 uniforms for the pupils.

Speaking at the ceremony, Ms Adu stated that the assembly and the Ghana Education Service (GES) absorbed the school which was hitherto a private educational institution into the public system last year in response to an appeal by the community.

She stressed that the New Patriotic Party (NPP) government was committed to the spread of quality education to all parts of the country without discrimination irrespective of their location.

Ms Adu advised parents to enrol all their children of school age in the institution to justify the huge investment.

She said as the assembly had already solved the community’s water problem by providing them with boreholes, the next facility it was envisaging was the construction of a health post to end the long distance travel to Oda for health care.

The MCE praised the proprietor of the private school, Mr Nathaniel Mensah, for willingly releasing his facility to the assembly and the GES for absorption into the public system without making any financial demand.

The Member of Parliament (MP) for Oda, Mr Alexander Akwasi Acquah commended Mr J. K. Owusu, the contractor who put up the structure, for not only completing the facility on schedule, but also executing quality work.

He took the opportunity to thank the people of Yeboakrom for voting massively for him and the President for the first time since the inception of democratic rule in 1992 and promised to reward them in due course.

Mr Acquah urged parents, teachers and pupils of the school to take proper care of the building for it to last longer.

The Birim Central Municipal Director of Education, Mr Benjamin Cudjoe, praised the community for its intention to rehabilitate and convert the old school block into teachers’ quarters.

He promised to post trained teachers to the school next academic year which begins in January, 2022.

The headteacher of the school, Mr Frank Boateng, and the chief of Yeboakrom, Nana Ampiah Mensah were grateful to the MCE, the MP and the GES for providing the magnificent edifice for the community and promised to maintain it regularly.