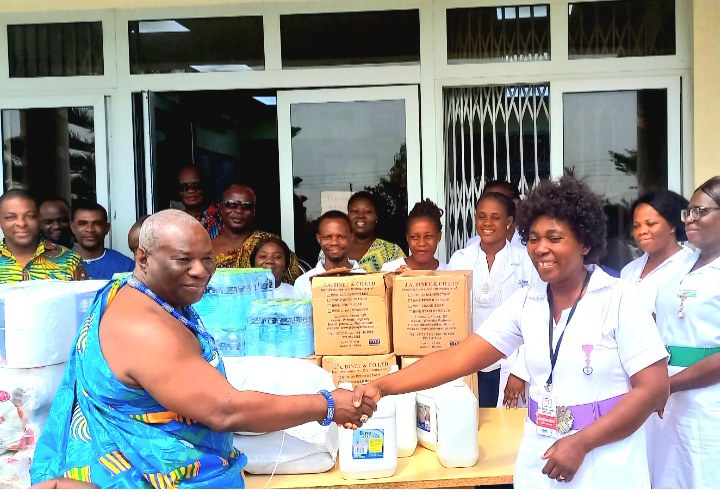 The Paramount Chief of the Effutu Traditional Area, Neenyi Ghartey VII has donated some items worth GHS11,300 to four institutions in the Effutu Municipality in the Central Region.

The exercise formed part of the Municipality's Christmas festivities and outreach to charitable institutions.

Along with Neenyi Ghartey, a sizable number of elderly men and women and some youth leaders attended the event and assisted with the presentations.

Neenyi Ghartey remarked that the season made him feel moved to lend a helping hand to organisations to foster a sense of community among residents.

"We have been carrying it out with the assistance of the Diasporan youth community and a few charitable organisations. We chose the hospitals and these homes to bless the children and patients in order to spread the joy that the holiday season provides to, if not everyone, then at least those institutions that value humanity."

He also exhorted the staff members of the various organizations to continue acting professionally while performing their tasks at the hospital.

The Methodist Raffiki Satellite village's director, Rev. Dr. Abekah who accepted the donations on behalf of the facility's management, thanked the Traditional Council and made a plea for more assistance from charitable organizations.

Meanwhile, Neenyi Ghartey celebrated the holiday season with the Municipality's school-age children by hosting the Santa in the Library event, which attracted hundreds of youngsters.

From December 19 to December 23, attendees who flocked to the library were given special gifts in packages.

The goal of the gesture, as Neenyi Ghartey VII reaffirmed, was to inspire students in the Municipality to make reading a habit.

"It is something we're doing for our students in this community, not only for Christmas, but to inspire them to take their academic careers seriously and form a healthy reading habit," he concluded.