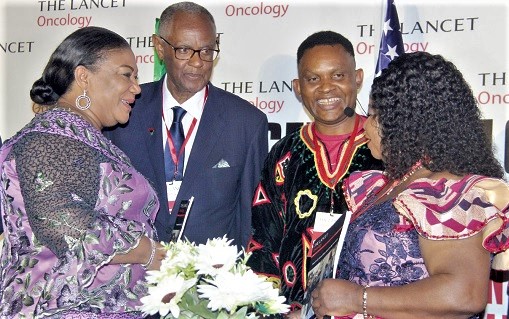 There is a looming health crisis in Sub-Saharan Africa (SSA) with a population of over 1.1 billion people. This is a region with poor maternal and child health care, with malnutrition and infections high.

As the region battles the situation, the issue of non-communicable diseases has also reared its ugly head. Key among these is cancer, hypertension and diabetes.

These have come up as a result of lifestyle, infection, environmental issues and family history. For the issue of cancer, it is estimated that between 30 and 50 per cent of deaths in low and middle-income countries could be prevented if population screening and early diagnosis are addressed to ensure patients with curable cancers report early.

The old adage of “prevention is better than cure” applies in this situation. The unfortunate thing is that it is not applied in this case.

According to a Lancet Oncology (medical journal) Commission launched on Tuesday, May 10, 2022, annual cancer deaths in SSA could reach one million by 2030, almost two times the 520,000 deaths from cancer which occurred in 2020. Moreover, cancer incidence is also projected to double by 2040 to more than 1.4 million cases per year, if interventions are not put in place by the various countries in the sub-Sahara region.

The report was launched in Ghana by the First Lady, Rebecca Akufo-Addo. The report, done in a three-year period, was developed by a team of 54 commissioners, 50 per cent of whom are locally based.

At the event, the Minister of Health, Kwaku Agyeman-Manu, expressed the belief that the implementation of the recommended actions in the report was crucial to achieving political commitments in the Sustainable Development Goals (SDGs) of the United Nations to reduce premature mortality for non-communicable diseases (NCDs) by a third by 2030.

The commission, comprised of national and international experts from academia and healthcare, presents a framework that can be used by governments and non-governmental organisations to increase access to cancer care, accelerate cancer prevention and increase survival rate in SSA.

For the Chairman of the Commission, Professor Wilfred Ngwa (Johns Hopkins Medicine, USA/ICT University, Cameroon), the ”projected trends underscore the devastating costs of inaction on cancer incidence rates and cancer mortality in SSA.

While the list of barriers hindering effective cancer control in the region is long, the pursuit of robust cancer registries, effective cancer control plans, early cancer screening and detection, and the integration of palliative care into the cancer care pathway is especially critical. In parallel, there needs to be a greater focus on the implementation of telemedicine and new technologies, building and training the oncology workforce, and boosting cancer research.

A scarcity of population cancer prevention programmes hamper progress toward reducing the disease burden, and most SSA countries see prevention programme participation rates below 50 per cent, and, in some cases, as low as 10 per cent or less. More than a third of all cervical cancer deaths globally occur in SSA, even though the population represents only 14 per cent of the world’s female population. A mere 16 out of SSA’s 46 countries had rolled out HPV vaccination programmes by 2019 with an average vaccination coverage rate of 49.4 per cent.

Limitations in health systems and government support are compounded by socio-cultural factors including a low level of public education and traditional beliefs such as that cervical cancer is due to supernatural causes and a means to allow a man to have more than one wife.

Infectious diseases (most commonly viral diseases, including HPV), tobacco use, alcohol consumption in men, and daily high-calorie intake, account for a substantial portion of the cancer burden in SSA. For example, obesity rates have increased significantly due to the shift to a more Western diet alongside more sedentary lifestyles, jumping by 1400 per cent in Burkina Faso and by more than 500 per cent in Ghana, Benin, Ethiopia and Togo in the past three decades.

Nevertheless, the commission acknowledges some progress in the regional battle to combat cancer. For example, Rwanda’s implementation of the national HPV vaccination programme, the first low-income country to have done so, has resulted in Rwanda becoming one of the countries with the highest HPV vaccination coverage worldwide.

The co-chair of the commission, Dr Beatrice Wiafe Addai of the Peace and Love Hospitals and President of Breast Care International, said “population knowledge and attitudes about cancer risk factors are critical to reducing the burden of cancer in Sub-Saharan Africa.”

The Commission recommends that each SSA country develops or updates its national control plan, which ought to include childhood cancer plans, managing comorbidities such as HIV and malnutrition, a reliable supply of medication, and the provision of psychosocial, supportive and palliative care.

Furthermore, plans should accommodate traditional and alternative practices — used by around 80 per cent of SSA’s citizens — and pathways to reduce missed diagnoses and late referrals.

Investment in developing cancer registries and cancer diagnostics for core cancer tests needs to be complemented by investment in workforce training. The Commission points out that this should encompass the support of local retraining opportunities and maintaining international collaboration opportunities for staff training.

The commission sets out a list of eight actions to make decisive progress toward reducing the burden of cancer in SSA. They include developing and updating national cancer control plans, as well as the provision of sustained financing, to ensure their implementation. It emphasised the need for investment in cancer registration to provide data upon which rational cancer planning will be undertaken.

The report has painted a serious picture of the situation of cancer in SSA. It is our hope that governments in the region will study the recommendations and adopt the requisite strategies to help deal with the problem.