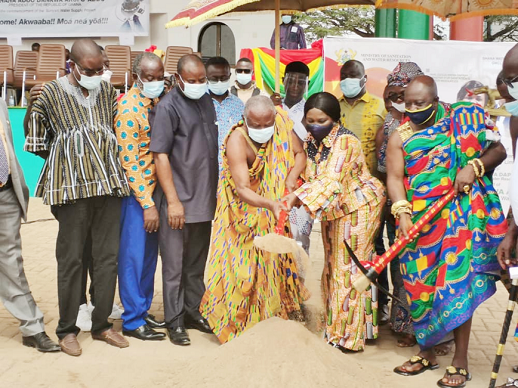 Ms Cecilia Dapaah being assisted to cut the sod for work to begin on the Sunyani Water Supply Project
30.5k Shares

The Minister for Sanitation and Water Resources, Ms Cecilia Abena Dapaah, has cut the sod for the first phase of the Sunyani Water Supply and Rehabilitation works to begin.

The sod cutting ceremony took place last Wednesday and was undertaken on behalf of the President, Nana Addo Dankwa Akufo-Addo.

On completion, the water supply system which is estimated to cost €133.33 million (about GH¢941.31 million) would serve communities such as Sunyani, Kotokrom, Yahwimakrom, Kobedi, Chiraa, Adanta, Odumase and neighbouring towns. The amount involved is a loan sourced from the Swedish Export Credit Agency (EKN) and the Standard Chartered Bank of the United Kingdom (UK).

Currently, it is the Abesim water supply system that is supplying water to the Sunyani East and West districts and neighbouring communities. The system has however been encountering some operational difficulties and needs to be expanded and rehabilitated to enable it meet the current demands for water.

Addressing the crowd that had gathered to witness the ceremony, Ms Dapaah said expansion of the Abesim water project was long overdue.

She said  the Abesim water treatment plant supplied the Sunyani Municipality and neighbouring communities with 1.2 million gallons per day (MGD), but with the current water demand of 5.9MGD residents were compelled to look for  alternate sources of water with the likelihood of having their health negatively impacted if not handled carefully, properly and hygienically.

The Managing Director of GWCL, Dr Clifford A. Braimah, admitted that even though the ongoing water rationing exercise in the Sunyani Municipality by the GWCL was not the best, it was nonetheless a good option to ensure water was distributed equitably considering the shortfall in supply.

The sanitation and water resources minister later told the Daily Graphic in an interview that to achieve the  “Water for All” agenda by 2030 the government had invested more than GH¢6 billion since 2017 in water projects spread across the country.

Ms Dapaah explained that the water projects were aimed at increasing water coverage in urban areas by 70 per cent as well as move the country towards attaining the goal of achieving ‘Water for All” by 2030 as articulated by member countries of the United Nations.

“The Ministry of Sanitation and Water Resources, in collaboration with the Ghana Water Company Limited, is working assiduously to bridge the gap between demand and supply which stands at approximately 122 MGD,” the minister said.

According to the GWCL, she said, average water production stood at 199 MGD, while demand was 321MGD. The company, she added, currently operated 91 urban water supply systems throughout the country.