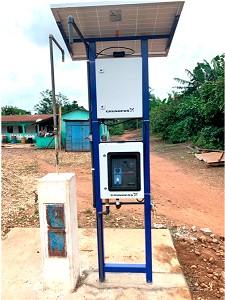 A digital mechanism that operates one of the wells Follow @Graphicgh

Grundfos Ghana Water Initiative (GWI) is developing 12 additional sites to serve over 100,000 people across rural Ghana access to clean water by the end of 2023.

The additional sites are being developed in collaboration with the Community Water and Sanitation Agency (CWSA) following the success of its innovative smart tech clean water pilot in Abomosu in the Atiwa West District in the Eastern Region.

The GWI, a project by SafeWater, a strategic business unit within Grundfos, aims to reach one million people in underserved communities in Ghana with clean water by 2026, providing drinking water that is both safe and easily accessible, from a reliable source that is sustainable and efficiently run.

A statement issued by the organisation stated that the innovation allowed users to manage their usage, and access treated, potable water using a pre-paid card, topped up via mobile money, from a source that is reliable and accessible all year round.

Currently, it said, safe running water was available throughout the community, pumped from a 90-metre borehole which was 1.5 kilometre from the village to a water tank.

Due to that, it said over 8,000 residents now had reliable access to clean water for the first time, including 262 smart household water connections going directly into residents’ homes.

She said the company was about to finalise its next project which was a completely new building and was also on track to have a total of 13 projects running by the end of next year, including Abomosu, thus, giving over 100,000 people access to clean drinking water within the next 18 months.

The Engagement Manager of Grundfos GWI, Xorlali Yao-Kuma Kpodo, said over eight million people in Ghana still did not have access to a safe and drinkable water.

That, he said, was because the current water supply in many areas was inefficient and untreated and unsafe to drink.

Since the start of the Abomosu pilot initiative two years ago, Mr Kpodo said the feedback from residents had been overwhelmingly positive.

That, he said had encouraged the organisation to move to the next phase of providing clean water to more underserved rural areas.

He said GWI’s approach to improving water access was to refurbish existing CWSA systems or establish new infrastructure where no system exists.

He said that would help to provide water to both households, public standpipes and refillable water dispensers.

Mr Kpodo said the Abomosu project involved upgrading an existing system that had fallen into disrepair, requiring two new boreholes, piping, and treatment system, as well as the water ATMs.

The GWI staff, he said worked with local teams to maintain the new system and were further developing a vocational curriculum for water system operations and maintenance to ensure skills were transferred to local staff for ongoing maintenance of the project in the future.