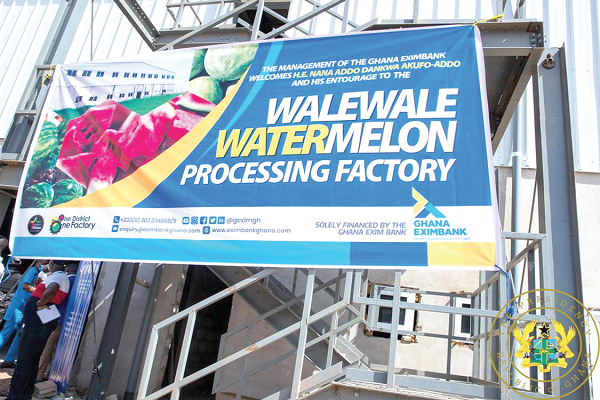 A section of the Walewale watermelon factory

Work on a watermelon juice factory in Walewale in the North East Region is about 90 per cent complete.

The project, which is part of the One-district One-factory (1D1F) initiative of the government, is expected to be completed in March 2022.

Already, equipment and machinery are on site, ready for installation.

It is expected to produce about 10 metric tonnes of various juices and beverages per hour when operations commence.

The factory, which is a subsidiary of Champion Foods and Beverages Limited, a wholly Ghanaian owned beverage manufacturing, distribution and marketing company, is being funded with a GHc36-million facility from the Ghana EXIM Bank.

The project will create direct employment for 300 people, while about 2,000 people, including farmers and aggregators who will engage in an out-grower scheme, will also benefit.

Last Tuesday, President Nana Addo Dankwa Akufo-Addo inspected work on the project as part of his two-day working visit to the region.

The President also visited Tamanaa company Ltd., a rice farming and processing company located at Nasia, near Walewale, which is also a beneficiary of the IDIF initiative.

As a result of the support received from the government, the company has been able to expand its operations by adding a facility that is able to mill 250 metric tonnes of rice per day, bringing the total to 290 metric tonnes per day.

So far, some 148 workers have been employed. The company also generates a turnover of some $1.5 million annually, while it markets 60 per cent of its parboiled rice under the brand name: Nasia Star Rice.

President Akufo-Addo expressed satisfaction with progress of work so far on the projects.

He said the benefits of the factories to the local economy were enormous in terms of job creation and improvement in the incomes of farmers, farm hands and drivers along the value chain.

The President said they would also go a long way to reduce the phenomenon of rural-urban migration and revitalise the nation’s industrial base.

While commending the investors for the projects, he urged farmers to take advantage of the factories to scale up the cultivation of watermelon and rice to boost their income.

The Chief Executive Officer of the Tamanaa Rice company, Alhaji Saibu Ibrahim, expressed appreciation to the President and the government for the visit and the support extended to the company.

He said apart from generating employment opportunities for the people, the company had also helped to improve on the welfare of farmers through the purchase of their produce.