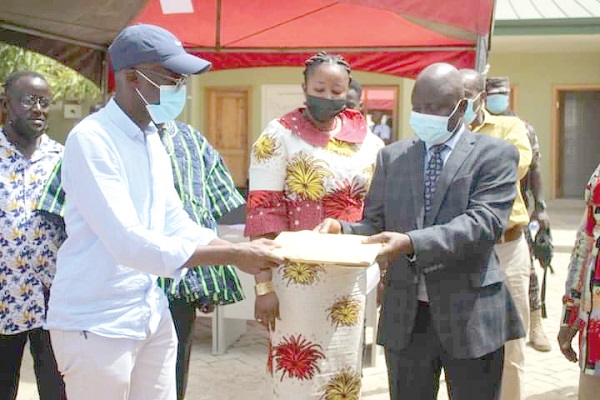 Almost 11 months after the sod-cutting ceremony for rehabilitation works to begin on the water supply dam and irrigation scheme at Vea in the Bongo District in the Upper East Region, work is yet to begin.

The work, which was expected to commence on March 31, last year, and completed in three years, includes the restoration of the eroded downstream slope of the dam embankment to improve the dam’s stability, as well as the rehabilitation of the irrigation canal.

The project, to be executed by Messrs Rann Luuk Limited, involves drainage works, farm road works and perimeter fencing of the irrigable area.

Funding of what has been described as “the urgent rehabilitation of the irrigation scheme” was part of the budget allocations of the Ministry of Food and Agriculture (MoFA) and its agency, the Ghana Irrigation Development Authority (GIDA)

Contractor not on site

However, the contractor has not been on site after the sod-cutting ceremony, compelling farmers and community leaders in the beneficiary communities to call on the government to expedite work on the project for them to reap its full benefit.

During a visit by the Daily Graphic to the project site to follow up on the progress of work, the contractor was not on site and no activity was observed as there was no equipment on site.

There was no indication on the ground to suggest that actual rehabilitation works on the water supply and irrigation scheme would commence soon, with barely two years left for the completion of the project.

The Managing Director of ICOUR, Dr Benedict Bonaventure Aligebam, told the Daily Graphic that the commencement letter of the contractor which delayed the project had been received and work on the project would begin soon.

He noted that the contractor had already renovated a building on the premises of ICOUR in Gworie to use as his office, saying “due to hikes in prices of goods and services the contractor and GIDA were reviewing the cost of the rehabilitation works to be done.

The Vea Dam was constructed between 1965 and 1980 and also serves as the source of drinking water for residents of Bolgatanga and its many surrounding communities and towns.

Since its completion, the facility has not seen any comprehensive rehabilitation works. Although the Ghana Water Company Limited (GWCL) has made some maintenance intervention on the dam, it has not been enough.

The irrigation infrastructure, namely canals, drains, among others, are almost completely broken, preventing users of the 850 hectares of farmland from irrigating during the dry season.

The Irrigation Company of Upper East (ICOUR) manages the Vea and Tono schemes. Although it was the desire of the Ghana Commercial Agriculture Project (GCAP) to rehabilitate both dams, it did not have enough funds to undertake the rehabilitation works on the dams.

At a ceremony to hand over the site to the contractor in March 2022, the Upper East Regional Minister, Stephen Yakubu, said the Vea irrigation scheme, established about 42 years ago had not seen major rehabilitation works, resulting in its breakdown.

He said as a result of the deplorable nature of the structure in the past, about 4,000 farmers had lost their livelihood, which had negatively affected their standard of living.

He said between 2007 and 2015, the amount spent on the importation of rice rose from $151million to $1.2billion, saying, “the Vea irrigation project alone has a total of 850 hectares of land under rice cultivation, comprising 350 hectares of rice of lowland and 500 hectares of upland for rice production.’’

The Assembly Member for the Vea Electoral Area, Robert Ayariga, said the people felt disappointed as they had not heard anything about the contractor after the sod-cutting ceremony to hand over the site to the contractor.

“Due to the delay, I, together with the chief of Vea, Naba Thomas Azubire II, went to the offices of ICOUR to enquire about the state of the project and we were informed that the contractor would be on site on November 10, 2022”.

‘’We came back with high hopes but our hope has been dashed since the contractor is still not on site as I speak to you today,” Mr Ayariga said, adding “ we are even planning to go back after the new year break to find out the cause of the delay in the execution of the project.

The assembly member disclosed that farmers along the project area were asked not to plant their crops in the dry season which usually started from November, in readiness for the commencement of the project.

“Although the farmers heeded this directive, the contractor failed to come to site to commence the project, leaving the thousands of farmers very disappointed. If we knew the project would still not commence in the dry season, farmers would have planted their crops”, he said.

A farmer at Gowrie, Maxwell Adongo, called on the government to resolve all bottlenecks to pave the way for the contractor to be on site to execute the project to increase agricultural production in the area.

Another farmer at Nyariga, Isaiah Azubire, called for the swift execution of the project to improve the lives of the farmers and increase their crop yield.