Use dialogue in resolving #EndSARS protest – Prez Akufo-Addo to Nigeria 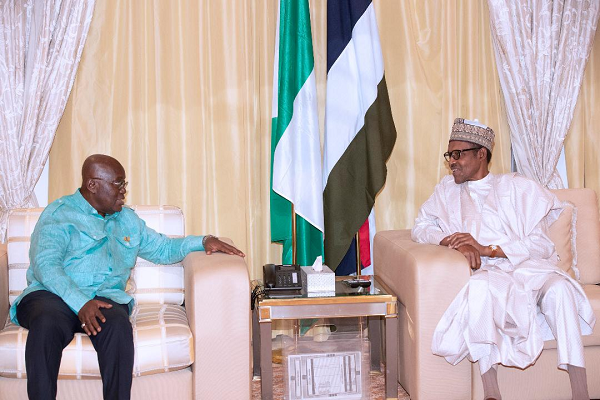 President Nana Addo Dankwa Akufo-Addo has called on the government of Nigeria and #EndSARS protestors to use dialogue in addressing issues of police brutality in the Nigeria.

President Akufo-Addo, who is also the Chairman of the ECOWAS, said in a tweet Wednesday that he had engaged Nigeria’s President Muhamudu Buhari on the matter and that he was committed to addressing the concerns of the demonstrators.

“I join all well-meaning persons in calling for calm, and the use of dialogue in resolving the #EndSARS impasse in Nigeria. I have spoken with President Buhari, who is committed to this end, and has begun the processes that will lead to reform,” the President tweeted.

He also condemned the violence which has erupted as a result of killings of some protestors by Nigerian security officers on Tuesday.

“Violence, be it on the part of the Police or protesters, cannot be the solution. To the families who have lost their loved ones, I express my sincere condolences, and I wish the injured a speedy recovery,” he added.

The #EndSARS protest which began on Thursday, October 8, turned bloody on Tuesday after armed uniformed officers reportedly opened fire on protestors at the commercial hub of Lagos.

According to Nigeria’s Punch newspaper, about 43 protesters and six policemen lost their lives in Tuesday’s protest.

The protestors are calling for the Special Anti-Robbery Squad of the Nigeria Police to be disband.

Despite Nigeria’s President Muhammadu Buhari dissolving the unit on October 11, the demonstrations continued with calls for reforms in the security forces.