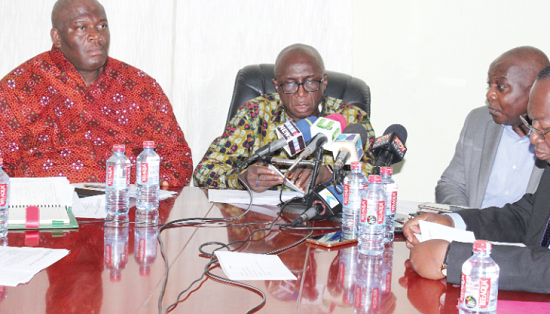 One hundred and sixty-three Ghanaians have been deported from the United States (US).

Sixty-three out of the number arrived in Accra yesterday, following new immigration policies introduced by the US since President Donald Trump assumed office.

About 7,000 Ghanaians are likely to be deported from the US to Ghana under the new immigration policies.

Shortly after their arrival at the Kotoka International Airport (KIA), the deportees are said to have been screened by the National Disaster Management Organisation (NADMO), the Ghana Immigration Service (GIS) and the Ghana Police Service.

In May this year, the US Ambassador to Ghana, Mr Robert P. Jackson, said about 7,000 Ghanaians living illegally in the US were being processed for deportation.

During a familiarisation tour of the Ghana Refugee Board (GRB) in Accra yesterday, the Minister of the Interior, Mr Ambrose Dery, told the board that the 63 would arrive yesterday.

The minister was accompanied by his deputy, Mr Henry Quartey; the Chief Director at the Ministry, Mrs Adelaide Annor-Kumi, among other officials.

Observation
Mr Dery said Ghana, as a member of the international community, had been home to many nationals but observed that Ghanaians were not receiving same treatment in some countries.

“For us in Ghana, we live as a member of the international community and we do not throw people out as some countries are doing. Today, 63 Ghanaian immigrants in the US are expected to arrive in the country,” he stated.

According to the minister, Ghana would continue to be hospitable to foreigners and not opt for the easier choice of deportation, stressing: “We will not do so.”

He said discussions were being held with the United Nations High Commissioner for Refugees (UNHCR) and the European Union on issues concerning illegal migration.

Refugees
There are about 14,000 refugees in Ghana now. Out of the number, two-thirds live in Ampanin and Krisan in the Western Region, Egyeikrom in the Central Region and Fetentaa in the Brong Ahafo Region.

The rest are in the urban and semi-urban areas in the country.

Mr Dery said the ministry had proposed to the President to include a professor of law on the membership of the GRB to help address matters bordering on illegal immigration.

He gave an assurance that the rights of all refugees in the country would be respected, in line with internationally accepted standards.

“Ghana will meet the international obligation. We are, however, not going to condone actions of people who clearly do not qualify to seek asylum in the country,” he stated.

Trafficking
The minister further observed that some Ghanaians were masquerading as refugees in the country and said the government would create an enabling environment to make room for Ghanaians to earn a decent living.

He appreciated the challenges faced by the GRB and other institutions under the ministry and encouraged them to collaborate effectively to carry their mandates through to make the needed impact.

Mr Dery also expressed worry over the trafficking of Ghanaians to foreign countries and called on all stakeholders to ensure that such inhuman practices were discontinued.

“Two days ago, 50 Ghanaians who were going to be trafficked were stopped by the Ghana Immigration Service,” he stated.

He said almost 80 per cent of refugees returned to their respective countries last year.

Dr Anani said about 50 per cent of the current refugee population were willing to go back to their various countries.

He said the GRB, in collaboration with the UNHCR and the World Bank, was working on a strategic plan to address emerging trends in refugee management.

Background
A few weeks ago, the US Ambassador to Ghana, Mr Robert Jackson, indicated that chartered aircraft would be arriving in the country with about 7,000 deported Ghanaians from the USA.

“More will be returning … There will probably be chartered aircraft coming with some Ghanaians in the next few weeks,” he indicated in an interview with an Accra-based radio station.

The Trump administration has embarked on a massive deportation exercise of illegal nationals living in the US.