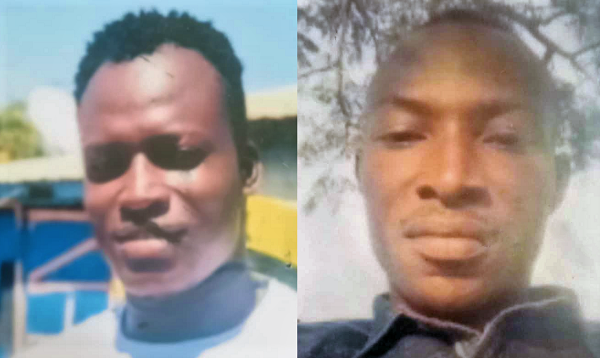 The Circuit Court in Bolgatanga has issued a warrant for the arrest of two suspected robbers for their alleged involvement in a robbery case in the Upper East Region.

The Upper East Regional Police Command is, therefore, on a manhunt for the two suspected armed robbers to face prosecution.

The suspects, Evans Aguyane, also known as Essien, and Baroug Akwasi Aguyane are alleged to be leaders of a robbery gang that robbed a gold dealer in October 2020 at the Gbane mining site in the Talensi District.

The police are appealing to the general public to assist in tracing the whereabouts of the two suspected armed robbers for them to face the law.

This is contained in a release signed by the Public Relations Officer of the Upper East Regional Police Command, Assistant Superintendent of Police (ASP) David Fianko-Okyere, on Thursday, February 10, 2022.

He said that Aguyane, a miner and a native of Zongoyiri near Binaba in the Zebilla District had “black hair, oriental eyes, triangular ears, stoutly built, chocolate in complexion and had a small tribal mark on his left cheek”.

He added that Baroug, a native of Shega near Tongo, “is dark in complexion, has black hair, deep-seated eyes, round ears and is stoutly built as well.

“Anyone with vital information leading to the arrest of the suspects should report to any nearest police station on their emergency numbers for their immediate arrest,” he said.