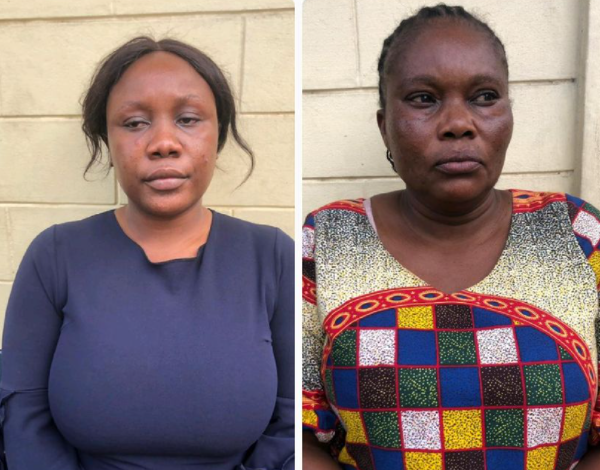 Two women have been fined GH¢3,600 each after pleading guilty to the offences of conspiracy to commit crime and providing false information to National Identification Authority Officials.

The suspects Olu Olarusi Toyin Tracy/Tracy Mensah and Yvette Mensah, a Nigerian national and a Ghanaian national were formally charged with the offences of conspiracy to commit crime namely Providing False Information to the Officials of NIA, contrary to Section 23(1) of Act 29/60 and Section 17(c) of the National Identification Authority Act 707 (Act 2000) and Providing False Information to NIA Officials.

On November 22, 2021, the accused persons were arraigned before the Adjabeng District Court, Accra and they both pleaded guilty to all the charges preferred against them and were subsequently convicted on their own plea and sentenced to a fine of Three Hundred (300) Penalty Units i.e. (GHS 3,600) each or in default serve six months in prison.

Meanwhile, accused person Olu Olarusi Toyin Tracy/Tracy Mensah is also to be repatriated to her country of origin after serving her conviction by the orders of the Court.

On November 19, the suspects went to the Head Office of the National Identification Authority (NIA) to acquire a Ghana Citizen Card.

They were directed by the NIA registration Official to the CID (NIA) Office for the usual vetting, interrogation and authentication of documents that most suspected applicants go through before they are allowed to go through the registration process of the Ghana Card if they are cleared by the Unit.

In the course of investigations, it was revealed that the birth certificate possessed by suspect Olu Olarusi Toyin Tracy @ Tracy Mensah bore the name “Tracy Mensah” with suspect Yvette Mensah as the mother and one Alhassan Fusieni as the father all Ghanaians.

Further investigation disclosed that, suspect Yvette Mensah was not the biological mother of suspect Olu Olarusi Toyin Tracy/Tracy Mensah and that, the two were never related in any way.