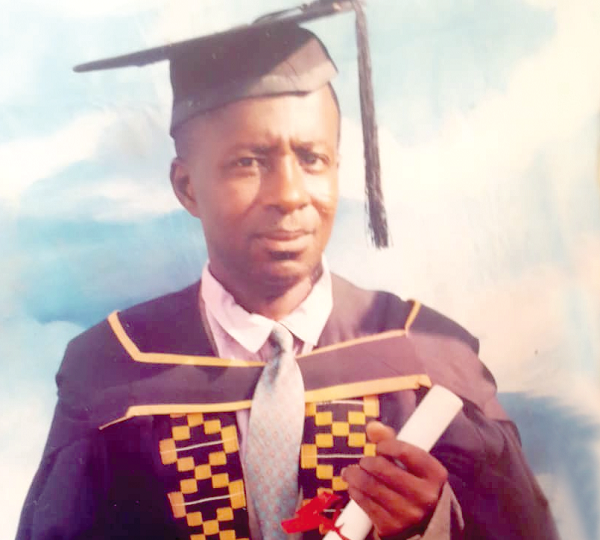 "Death is a necessary end and it will come when it will!"

The wicked death has once again laid its icy hands on our bosom crony, which sad event occurred on Tuesday, March 8, 2022 at his hometown, Nsuta in the Sekyere Central District of the Ashanti Region.

On Saturday, April 2, 2022, Asiedu Marfo, affectionately called Kwame Aban, a.k.a., Government, 64, who passed on peacefully in his sleep, joins his ancestors in the
other world.

A couple of days before his demise, he joined his daughter to mourn the passing of his ex-partner (mother of the daughter) at Kofiase in the Asante Mampong municipality.

The daughter had returned from abroad to perform her mother's final funeral rites at Kofiase.

On the fateful Tuesday morning, one of his family members, as usual, attended upon him.

However, after entering his room, and calling him several times, there was no response. That was the end of a man who stood against all odds to achieve his lifetime dream.

After his secondary education, he pursued journalism studies at the Ghana Institute of Journalism.

Thereafter, he was posted to the Kumasi office of the Graphic Communications Group Limited (GCGL) for his national service.

On completion of his national service, the GCGL employed him to strengthen the editorial staff of the Daily Graphic in Kumasi.

They were later joined by Akwasi Ampratwum Mensah to form a formidable squad in the Ashanti Regional office of Graphic at Mbrom, Kumasi.

Unfortunately, Kwame was affected by a redeployment exercise rolled out by the GCGL management in the late 80s.

However, he did not allow that jolt to diminish his ambitions.

Kwame Aban also had a stint with the Garden City Radio (Opanin de Panin) of the Ghana Broadcasting Corporation(GBC) in Kumasi.

Later, he secured a job at the National Commission for Civic Education (NCCE) in Kumasi.

His engagement at the NCCE opened the sluice gate for him to further his education at the Kwame Nkrumah University of Science and Technology (KNUST), where he studied English and Law.

After paying his dues at the NCCE, he joined Graphic again.

He was posted to Takoradi and later to Sunyani, where after working for Graphic for years, he was retired on medical grounds.

Just as every human being has his/her strengths and weaknesses, Kwame had his shortcomings. However, if there is anything that we can remember him for, then it was his determination to succeed in life in spite of all the odds.

Kwame never allowed his diminutive nature to intimidate him or prevent him from pursuing his lifetime ambition.

Very quiet, reserved but friendly, he made every effort to shrug off all resistance in his life.

Although a Christian, he approached issues of religion with an open mind.

His philosophy was centred on the message of Christ Jesus which enjoins believers to do unto others what they want others to do unto them.

He also admired the Epicurean philosophy of enjoying in this world because life is short.

As a Christian, Kwame will also be remembered for his brilliance on the piano during church services at the Presbyterian Church of Ghana Nsuta in his heyday.

May the Lord give him a peaceful rest. Kwame, fare thee well! Adieu!!!