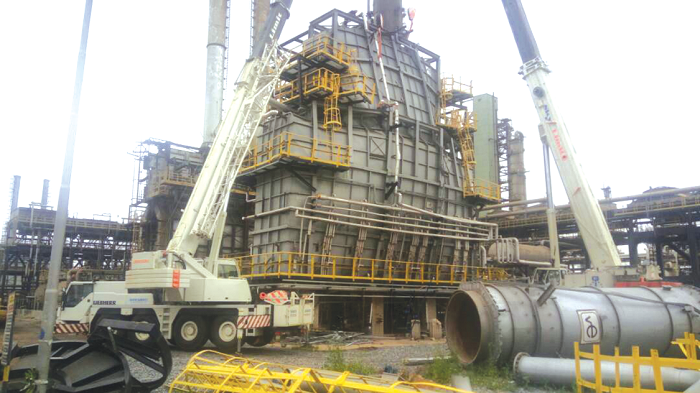 Production capacity of the Tema Oil Refinery (TOR) has dropped from 45,000 barrels per stream day (bpsd) to 28,000 bpsd due to the dismantling of its crude oil furnace which exploded in January, this year.

The dismantling followed a recommendation made to the management of the refinery by its insurers and the manufacturers of the furnace, Vega Engineering of Italy, after a technical assessment of the equipment ruled out its ability to function adequately.

This is because of what the engineering firm described as “a substantial damage to most of the crude oil processing devices in the furnace,” high-ranking sources at TOR told the Daily Graphic.

It said the exercise, which started in June this year, had seen the removal of the entire furnace, leaving behind only concrete stands on which the furnace sat.

The installation of the new furnace was completed in October last year, but exploded on January 17, 2017, when technicians on duty attempted to restart the equipment which had gone off suddenly while refining crude oil.

This occasioned an emergency shutdown of the facility to avert any fire incident or other hazards.

The furnace was commissioned on December 2, 2016 at the cost of €5 million, as part of an expansion project carried out by TOR to increase its processing capacity.

The Daily Graphic gathered that all the tubes inside the furnace which transmitted crude oil to be heated prior to processing got damaged in the incident.

Similarly, the furnace shell, the refractory material (a chamber that retains heat at high temperatures) as well as the instrumentation in the furnace, among other vital parts, also suffered severe damages, rendering them useless.

It added that some spare parts of the damaged furnace had been identified to be in good condition and as such could be used to replace the dameged parts.

The Daily Graphic also gathered that the refinery’s management was yet to take a decision on the report of the internal committee investigation which recommended sanctions against some technicians and operators who were on duty on the day of the explosion.

According to the source, although the maintenance was anticipated to have been carried out within a shorter period, delays in the procurement and delivery of some essential spare parts for the refinery prolonged the maintenance period.

“The Crude Distillation Unit (CDU) is, however, being prepared for production, while the Residual Fluid Catalytic Cracker (RFCC) comes on stream when the CDU is able to generate adequate raw material for it to be used to process liquefied petroleum gas (LPG) among other by-products,” the source added.

Attempts to reach management of the refinery for comments were unsuccessful. The acting Managing Director, Mr Isaac Osei, did not answer the phone calls.