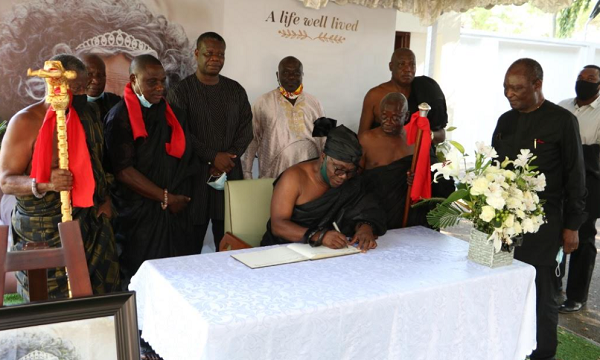 Also at the former President's residence to mourn with him were various delegations from the Coca Cola Bottling Company, Light House Chapel, the Okyehen, the Aborehemaa, the National Road Safety Authority, the Osie of the Avatime Traditional Area and a host of other groups and individuals.

There was also a delegation from the Volta Regional House of Chiefs and the Asogli State.

Addressing the former President and his family, Togbe Afede said: “24th of September, 2020 was a sad day for all of us. On that day we lost our illustrious mother, through whom we have you [Rawlings]; one of the very best leaders we can dream of having. Today, we are here to extend to you our condolences and to pray that the good Lord consoles you and keeps you strong. It is our prayer that her soul rest peacefully in the loving arms of the Father. We ask that the good Lord takes care of all of you.”

Earlier, Ambassador Dan Abodakpi, Stool Father of the Anlo State in receiving the delegation, commended Togbe Afede for the qualitative improvement he had brought to the affairs of the National House of Chiefs.

“We have been observing closely the courage, principles and the determination that you have brought to bear on the high office of President, ably supported by Daasebre Kwebu Ewusie,” Ambassador Abodakpi stated.

The Stool Father of the Anlo State also congratulated the newly elected President of the Volta Regional House of Chiefs, Togbe Tepre Hodo, the IV, and Paramount Chief of the Anfoega Traditional Area.

The Managing Director of Coca Cola West Africa, also disclosed that Madam Victoria Agbotui, the late mother of former President Rawlings, was an adherent of the Coca Cola brand until her last year on earth.

Coca Cola’s Felix Gomis, in commiserating with former President Rawlings and his family during a condolence visit on Tuesday, said: “We have come to learn through our intelligence that she was an adherent of Coca Cola products all her life.”

Mr. Gomis offered the “deepest condolences” of the Coca Cola Company to former President Rawlings and his family. He said the company knew the legacy of Madam Agbotui and mourned alongside the family and the people of Ghana.

The Coca Cola boss also took the opportunity to express the company’s gratitude to the former President for the support given the company during his tenure as President, through the establishment of their factory and installation of some of the lines.

The Managing Director also donated an assortment of the company’s products and an undisclosed cash amount.

Former President Rawlings in expressing his gratitude to Coca Cola also spoke about the quest for excellence, the quest for perfection, the responsible use of freedom and the strive for godliness. He referred to the fact that though the Europeans introduced Africans to God, “we took it and detached God from ourselves and yet I think in our tradition, in our culture we do not externalize God to that extent; we internalize it. He (God) is very much part of us.”

Flt Lt Rawlings recalled with nostalgia one Coca Cola advertisement that enhanced the brand and exposed widely. He said he was disappointed it was withdrawn after a short period.

Also at the office of former President Rawlings to commiserate with him on Tuesday, was a delegation from the United Denominations of Light House Churches led by its founder Bishop Dag Heward Mills.

Bishop Prince Addai who spoke on behalf of the delegation said having heard of the demise of Madam Agbotui and being a special friend of former President Rawlings, Bishop Dag Heward Mills thought it necessary to visit to commiserate with the family on their loss.

Having exchanged pleasantries Bishop Dag Heward Mills prayed and thanked the Lord for blessing Madam Agbotui to bring forth a great son of Ghana. He also thanked God for giving Madam Agbotui 101 years on earth and prayed for peace and comfort for the bereaved family.

Nana Akosua Takyiwaa, Aborehemaa of Amansie also led a delegation to commiserate with former President Rawlings. Speaking through her linguist, she urged the former President and his family to stay strong, and presented traditional drinks.

Other delegations who have in the past few days commiserated with the former President and the Agbotui and allied families include a delegation from the Okyehene, led by Daasebre Boamah-Darko, Adontehene of the Kyebi Traditional Area, a delegation from the Chinese Association of Ghana and the National Road Safety Authority.

All is set for the final funeral rites of Madam Victoria Agbotui on Saturday October 24. There will be a non-denominational service at the Forecourt of the State House, Accra from 9am to 10.30am after which the body will be conveyed to Dzelukope in the Volta Region for interment. A burial service will be held at the Keta School Park after which Madam Agbotui will be interred at a private ceremony.