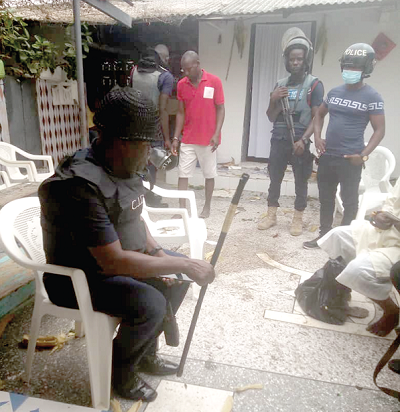 The police at the scene of the violence

Yesterday morning’s incident was the latest involving the traditional priest whose shrine at the Osabu Ayiku Shrine house was alleged to have come under a similar attack last month.

That incident led to the injury of one person.

Yesterday's incident was said to have been carried out when the wulomo was in the process of concluding the Abele Kuu or Abele Gbamɔ (sharing of maize) rituals which precedes the celebration of the Teshie Homowo festival.

Amidst the throwing of violent objects, three persons — including Nuumo Badu Odaano Odiapenser I — sustained some injuries.

The group which launched its attack at about 7:50am dispersed and took to their heels upon sightings the police who had been called in to restore law and order.

The Station Officer at the Teshie District Police Station, Chief Inspector John Teye Nartey, told the Daily Graphic that the police received a distress call that the Osabu Ayiku Wulomo and the shrine house were under attack.

He said some officers were dispatched to the scene, but the attackers fled immediately they saw the police.

"We chased them to effect arrest, but they absconded," he said.

He revealed that despite being unable to effect any arrest, the police had begun investigation into the incident to fish out the culprits.

"These are known people in the community whose names have been given to us," the station officer said.

"We have begun our investigations and will soon apprehend them," he added.