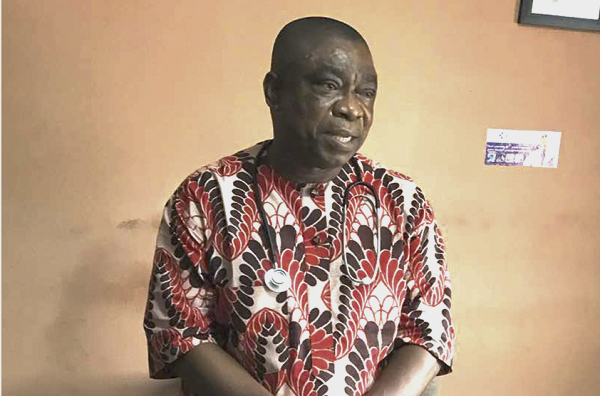 A 59-year-old man suspected to be a quack doctor, has been arrested at Ashongman just after he performed an abortion on a 17-year-old girl.

The suspect, identified as Kenneth Kwarteng, but who uses various names, including Kwame Kwarteng and K. K. Kwarteng, was arrested by a joint team from the Dental and Medical Council and the Kwabenya Police Station.

The 17-year-old girl, whose identity has been withheld by the police, was said to have been brought to the facility, Obaahemaa Memorial Clinic at New Ashongman Estate last Stop, in Accra, operated by the alleged quack doctor, by her mother for her seven-week-old pregnancy to be terminated.

To ensure the safety of the girl, the Dental and Medical Council arranged for her to be taken to the Legon Hospital with the help of the National Ambulance Service.

The girl has since been admitted at the hospital where doctors said she needed urgent medical attention since the abortion performed on her by the alleged quack doctor was not completed.

Journalists who were part of the operation to arrest the alleged quack doctor toured his clinic, which is part of his place of residence in a two-storey building at Ashongman.

Apart from the doctor’s consulting room, the clinic has two wards with six beds, while the improvised theatre uses a long table as a theatre bed which has a plastic bucket hanging at its foot for the collection of blood, and two long wooden stands where the legs of patients rest.

There were blood stains in the theatre which had a bathroom attached to it, while a bowl of water, scissors and other medical implements with various types of sedatives and injection syringes were found on a table.

Briefing journalists after the operation, the Deputy Registrar of the Medical and Dental Council, Dr Divine Banyubala, said it took four months of undercover investigation to uncover the illegal operation of the alleged quack doctor.

He said the hospital did not have any medical staff apart from the quack doctor.

"There were no nurses, laboratory technicians or physician assistants," he stated, indicating that the facility did not also keep records of the patients who visited the place for medical attention.

"From our investigations, we found that the man mainly did illegal abortions although if anyone visited with a headache or any other condition he treated them, but his speciality was illegal abortions," he added.

A company registration on the wall of the hospital at the OPD indicated that the facility was registered as a business on June 23, 2015 in the name of Obaahemaa Clinic, yet the Medical and Dental Council said it found out that the suspect initially operated a clinic under the name New Vision Clinic, at Agbogbloshie, and when his illegal operation was exposed, he relocated.

In an interview after his arrest, Mr Kwarteng admitted that he was a fake doctor since he was only trained as a registered nurse.

He said he had practised as a registered nurse for the past 21 years and explained that he owned the facility and employed specialists but only worked on patients when the doctors were not around.

When asked if he would perform an abortion on his 17-year-old daughter, he said no but would refer her to another hospital if it was life threatening.