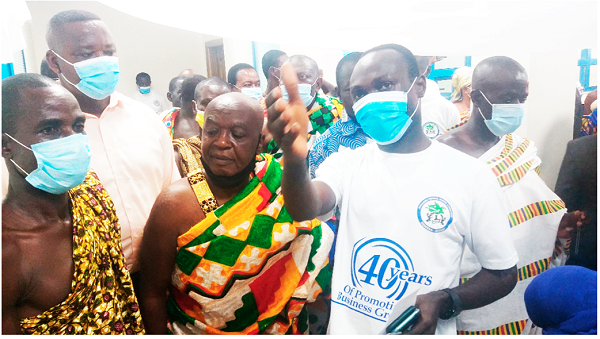 The Omanhene of Adansi Traditional Council, Nana Opagyakotwere Bonsra Afriyie II, has advised the people of Adansi Asokwa in the Adansi North District in the Ashanti Region to patronise and have obsessive interest in the businesses created and owned by the local people in the communities.

He said businesses drive the economy of the various localities and bring development to the communities.

“It is the desire of every traditional leader to see development within his traditional enclave and among the people, so when businesses and financial institutions do well, they automatically bring evolving transformation to the community,” he stressed.

The Omanhene gave the advice at the opening of the Adansi Asokwa branch of the Adansi Rural Bank at Fomena in the Adansi North District as part of the bank’s branch expansion drive for the 2021 operational year.

The branch office, which operated as an agency, has now been given the licence by the Central Bank to operate as a fully fledged branch office to carry out all banking services as required by law.

The Adansi Asokwa branch now brings to 12 the number of branches currently being operated by the bank across the region.

He emphasised that financial institutions and businesses in the community brought development, and so they should not depend solely on the government for development projects.

The Chairman of the Board of Directors, Mr Kofi Ampofo Agyapong, expressed the hope that the fully fledged Asokwa branch would further improve the profit levels and service quality of the bank.

He said the inauguration of the Adansi Asokwa branch was part of a five-year strategic plan for growth and operational efficiency.

He urged residents of the area, particularly the artisans and itinerant traders within the enclave, to embrace the bank’s services and products.

He, however, urged customers who would benefit from the bank’s credit facilities to make the conscious effort to pay back the loans so that others could also benefit and for further business sustainability.