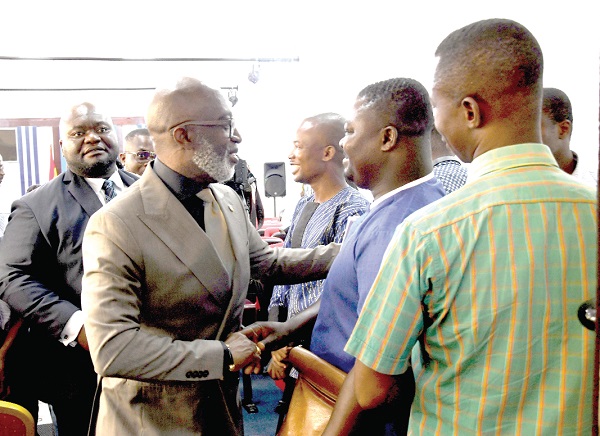 Yofi Grant (2nd from left), CEO of GIPC, interacting with some journalists after his presentation on the centre’s state of agencies report. Picture: EBOW HANSON
30.5k Shares

He said the changing landscape of the global economy had made it imperative for countries in Africa to develop new narrations in their relationship with the rest of the world to help attract the needed investments that would propel growth.

Mr Grant made the call at the Minister’s Press Briefing series in Accra yesterday where he provided an update on an upcoming annual assembly of Africa Investment Promotion Agencies.

The summit will be held on Wednesday, January 25, in Accra, on the theme: “The role of IPAs in facilitating intra African trade”.

Mr Grant, who is also the sub-Saharan Africa representative on the board of the World Association of Investment Promotion Agencies, said the event would provide a platform for discussions on how to increase FDI flows into the continent.

Participants will also discuss emerging opportunities that the Africa Continental Free Trade Area (AfCFTA) presents and how various development actors can leverage them to facilitate trade on the continent and boost socio-economic development.

Mr Grant further said that the summit would set the tone for collective engagements on how development actors could target, channel and leverage foreign investments for mutually beneficial outcomes.

“By 2050, Africa will be a quarter of the global population.

What if by 2050 Africa was also the recipient of a quarter of global FDI flows?

“As we look inward to how we can promote intra-African trade through the AfCFTA, Africa needs to redefine how we look outward towards our investor partners.

This redefinition is best created when we sit around the table and discuss where we are and where we want to go.

“This is why we are convening the first meeting.

Through this we hope to deepen and continue engagements for the formation of an association of Africa Investment Promotion Agencies,” he said.

Mr Grant also said that the meeting would open up on the current situation for extensive deliberations.

According to him, Latin America attracted about $620b FDI post-COVID-19 era, Asia some $140b, and the whole of the African continent $83b.

“The Africa continent is the most resourced in terms of natural resources, and in this day and age of energy transitions, the continent is very well positioned in a way to actually solve many of the global problems,” he said.