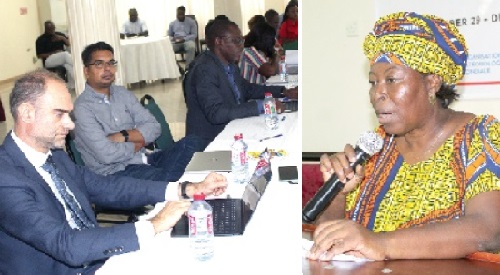 Stakeholders from countries within the Volta Basin have converged on Accra for a workshop targeted at developing a regional strategy for reducing and managing floods and drought in local communities.

The strategy, which is expected to be ready next year, will provide guidelines for implementing climate action in communities that have suffered from the adverse effect of extreme natural phenomena, particularly floods and drought.

These disasters have caused great damage to communities, including loss of lives and property in the Volta Basin which covers countries such as Ghana, Togo, Cote d'Ivoire, Burkina Faso and Benin.

For instance, the Volta Basin Authority (VBA) estimates that more than 30,000 people are affected by flood annually in the basin, with the global climate crisis and population increase expected to push this number to 70,000 in the next few years.

Added to drought, the number goes up to 4.5 million people and is expected to further increase to 16 million in the next few years if nothing is done to address the climate change impacts.

It is in response to the challenges that a project dubbed "Integrating Flood and Drought Management and Early Warning for Climate Change Adaptation in the Volta Basin (VFDM) was started in 2019.

Funded by the Climate Change Adaptation Fund, the project's main objective is to provide appropriate solutions to the climate crisis and help to restore sustainable socio-economic livelihood to residents of the basin.

As a measure to build resilience of communities and ecosystems in the Volta Basin, a strategy for flood and drought risk prevention and management is being developed by stakeholders.

The strategy draws on knowledge from the implementation of the VFDM project, guidelines, policies and strategies for disaster risk management at the regional, national and local levels as well as stakeholders' inputs.

In a speech delivered on her behalf, the Minister of Sanitation and Water Resources, Cecilia Abena Dapaah, described the move to develop the flood and drought risk reduction strategy as a proactive step that would help address the impact of climate change on communities.

The speech, which was delivered by the Executive Secretary of the Water Resources Commission (WRC), Adwoa Paintsil, urged the stakeholders to bring the varied expertise to bear on the process of developing a strategy.

For his part, a project officer at the World Meteorological Organisation (WMO), Nikiema P. Michel, underscored the need for countries in the Volta Basin to be committed to the strategy document being developed as it held the key to implementing prudent climate actions to build the resilience of communities to flood and drought.

He called on national stakeholders to adopt the recommendations of the strategy and develop an action plan for preventing and managing the twin disasters.

The Executive Director of the VBA, Dessouassi Yaovi Robert, underscored the need for governments within the basin to strengthen collaboration to swiftly tackle the climate crisis.

He said if countries worked in isolation, they could not make the desired impact in terms of reducing the risks of floods and drought.