Silence on happenings in Ghana no longer an option – Group 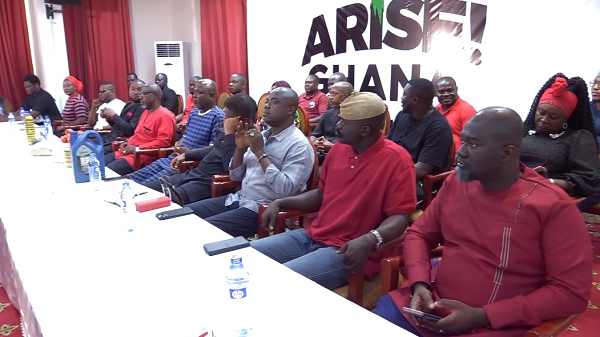 A newly formed nationalist group, Arise-Ghana, says remaining silent over the happenings in Ghana is no more an option any patriotic citizen should consider.

According to the group, the country has come to a point where all patriotic citizens ought to speak up in order to put duty bearers on their toes.

Speaking at the maiden press conference of the group on Wednesday afternoon, May 25, 2022 in Accra, the General Secretary of All People's Congress (APC) and leading member of the group, Mordecai Thiombiano, said to remain quiet over the present state of affairs is to encourage the continuous slide of our country into the abyss.

For him, "choosing not to speak about the current state of affairs means being complicit in the ongoing state capture and the sacrifice of our collective future on the altar of instant gratification."

He is of the view that there is so much mismanagement of the country's resources under the current administration and that "We obviously cannot afford the option of remaining silent."

Mr Thiombiano accused the Akufo-Addo-led administration that in spite of being the most resourced government in Ghana’s history, “this government has wasted all the unprecedented revenues that have accrued to them totaling about GH¢500 billion mainly through profligacy and corruption.”

He said the country’s economy continues to wallow in the doldrums, with all economic indicators nose-diving while government looks on helplessly.

“The Cedi’s free-fall continues unabated as a result of the failure of Government to translate its rhetoric into action,” he noted, adding “The continuous depreciation of our national currency against its major trading partners continues to wash away the profit margins and in most cases, the capital of many businesses and traders who depend on forex exchange to import vital goods into the country.”

The RISE-Ghana member said the country has lost access to the international capital market due to the country’s unsustainable debt position, stressing that “Our Public debt has increased to unprecedented and unsustainable levels from GH¢120 billion to over GH¢391.9 billion cedis only in the last five and half years.”

Mr Mr Thiombiano said Ghana’s debt to GDP ratio has galloped from 56 per cent in 2016 to about 80 per cent, saying that “while our debt service burden has moved from about GH¢14 billion as at December 2016, to a whopping GH¢50 billion.”