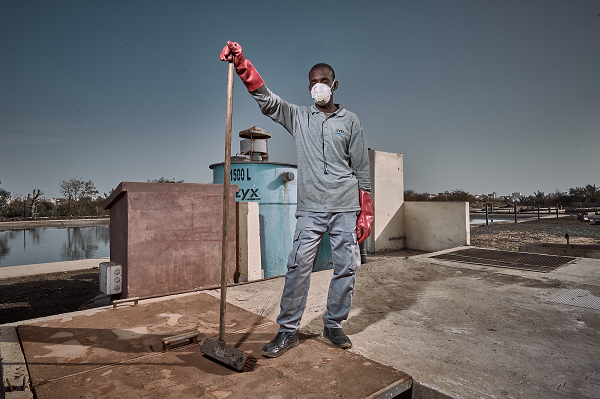 If someone says that cleanliness is next to godliness, they are simply referring to the idea that people have a moral duty to keep themselves and their surroundings, particularly their homes, clean.

It has been established that safe water, toilets and good hygiene keep people alive and healthy.

That is why access to clean water, basic toilets, and good hygiene practices not only keeps people, particularly women and children thriving, but also gives them the space to live dignified lives.

Information sourced from UNICEF indicate that globally, 2.2 billion people still lack access to safe drinking water, and that more than half of the global population do not have access to safe sanitation.

It is also estimated by UNICEF that three billion people do not have access to handwashing facilities with soap, with 673 million of world’s population still practicing open defecation.

Lack of access to good sanitation management facilities and practices put the lives of many people in jeopardy, including the risk of death. This is because, according to UNICEF, over 700 children under age 5 die every day of diarrhoeal diseases due to lack of appropriate WASH services.

This is why issues bothering on sanitation continue to remain a subject of interest for many world leaders and stakeholders in the WASH sector.

Many developing countries, including Ghana continue to battle with the issue of sanitation and waste management. This has been compounded by rapid urbanisation, which has put pressure on land for development by individuals and businesses.

In many cities in these developing countries, rapid urban growth has far outpaced the capacity of local authorities to provide basic services, including adequate drainage systems. In effect, the authorities are overwhelmed by the situation due to lack of transparency and accountability in governance.

The scene in most of these cities, especially the poor neighbourhoods, is one of poor roads, choked drains, leading to flooding when it rains, and a general sense of an unkempt environment.

The challenging nature of the issues of sanitation explains why the topic will be one of the many WASH related subjects that will gain attention at this year’s Word Water Forum (WWF), which will open today in Darkar, Senegal.

Global leaders and stakeholders in the water and sanitation sector are meeting in Dakar from today, March 21 - 26, 2022, under the auspices of WWF, to deliberate on key issues affecting the sector, namely (1) water security, (2) cooperation, (3) water for rural development and (4) the "Tools and Means" box including the crucial issues of financing, governance, knowledge management and innovation.

The triennial WWF, which is in its 9th edition, is an initiative of the World Water Council (WWC). The WWF is the world's largest event on water. This year’s event is on the theme: "Water security for peace and development." The forum has been organised every three years since 1997 by the World Water Council, in partnership with a host country. More importantly, it is the first of its kind to be hosted in sub-Saharan Africa.

Even though the name of the forum, World Water Forum, naturally implies that it’s a forum meant for water, there is also a component for sanitation at the forum. This is because water and sanitation moves hand-in-hand and sanitation continue to remain a major challenge for many world leaders.

This is why Speak Up Africa, a Policy and Advocacy Action Tank, based in Dakar, is taking the lead to support African countries in addressing these challenges and creating an enabling environment for safely managed sanitation in Africa.

Speak Up Africa is a Policy and Advocacy Action Tank dedicated to catalyzing leadership, enabling policy change, and increasing awareness for sustainable development in Africa.

For instance, Speak Up Africa, will on March 23, 2022, launch its the Golden Sludge Campaign to reinforce awareness-raising, prioritisation, and political commitment through the implementation of equitable and inclusive sanitation policies in Africa.

The Golden Sludge Campaign aims to increase political commitment for sanitation through the development and implementation of policies that incorporate gender, equity, inclusion, clear roles and responsibilities and service levels across the value chain in Africa.

Similarly, the campaign is also intended to strengthen the capacity of civil society organisations, policy makers and the private sector to sustain a permanent dialogue around sanitation policy change.

The Golden Sludge Campaign is also intended to help develop and disseminate advocacy tools on sanitation, as well as to support the creation of an enabling environment at national level for safely managed sanitation, including the introduction of new and innovative technologies to strengthen the demand for inclusive and equitable sanitation policies.

To further stem its efforts towards ensuring strong advocacy on sanitation issues in Africa, Speak Up Africa, is playing a key part in the concept of the "Sanitation Village" in this year’s WWF.

The concept of the "Sanitation Village" is a unique creation at this year’s WWF meant to strengthen advocacy and action for the implementation of concrete responses to accelerate universal access to safe sanitation.

The establishment of the Sanitation Village is a major innovation in the World Water Forums as it is the first time in its history that this event will take place.

This particular innovation will be used to highlight, over time, the issues and challenges of sanitation as well as the institutional, technological, technical, scientific and cultural responses to sanitation across the world, particularly in Africa.

Furthermore, it will be a space for the "Forum of Answers" to sanitation to call for strong actions to accelerate the implementation of regional commitments and the achievement of the SDG6 targets related to sanitation.

As such, the Sanitation Village will be an integral part of the 9th Forum's major exhibition and will be a space for advocacy, raising awareness, discussion and learning about sanitation and hygiene, promoting ongoing innovations in sanitation and mobilising actors for the call to action.