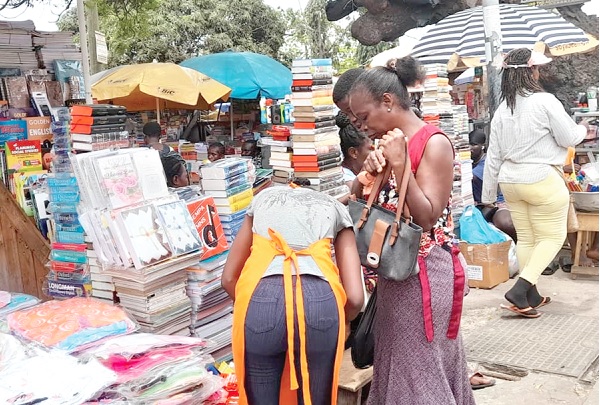 A parent purchasing some books for her child Follow @Graphicgh

Parents and guardians buying school supplies for their children and wards who have gained admission to senior high schools (SHSs) are complaining about the high cost of the items, blaming it on inconsiderate traders who are cashing in on the situation.

Over the weekend, there was significant rush for the purchase of SHS supplies in the central business district (CBD) of Accra and other market areas, ahead of the opening of school for first-year SHS students today.

Left with little choice over getting the items, parents and guardians, although concerned about the cost of the items, had to go through, bargaining on prices to be able to meet their budgets.

Enquires by the Daily Graphic about the prices revealed that the prices of some of the items had gone up by 50 per cent over the previous years’. Such items included ‘chop’ boxes, trunks, footwear, school bags and books.

The price of a school bag has gone up from GH¢90 to GH¢130, while the prices of provisions have also gone up.

Two weeks ago, the Ghana Education Service (GES) released the of placement of candidates of the 2021 Basic Education Certificate Examination (BECE) into SHSs and technical institutes (TIs).

With limited time for the new students to report to school, the Daily Graphic went round to observe how shopping was going for them, some of whom are reporting either as boarders or day students.

It was observed that many of the students were making the effort, along with their parents and guardians, to get the items on their prospectus to be able to report to school.

At the CBD of Accra and the market centres, the Daily Graphic observed that some parents and guardians, accompanied by their children and wards, were in various shops trying to get the items on their prospectus, such ‘chop’ boxes, trunks, school bags, books, toiletries, stationery, buckets, brooms, footwear, among others.

Some of them said they had got to town as early as 7 a.m. to get the items before they got caught in the anticipated brisk activities.

With each parent or guardian carrying the prospectus from the school his or her child or ward had been placed in, they moved from shop to shop, with others making enquiries on the items being sold.

It was observed that some bargained with the traders on the prices of the items they intended to buy, while those who had been able to purchase their items could be seen carrying them on board vehicles

Traders in boarding school supplies seemed to be in brisk business.

Some of the traders lamented the fact that the prices of most goods had gone up everywhere, and that theirs were no exception, which had slowed down business.

“Since February, the cost of items, even foodstuffs, has gone up, with suppliers blaming it on the fall of the cedi, the rise in fuel prices and the high cost of transportation,” some of them explained.

A trader who sells mattresses explained that the price increase stemmed from the manufacturers, adding that she gained very little profit from what she sold.

Again, she said due to the increase in prices this year, selling the items had become difficult, as most parents who purchased them did a lot of bargaining.

“We, as traders, don’t control the prices, particularly for mattresses; they are determined by the manufacturers and distributors. We are also not comfortable with the rise in prices, as it has become difficult to sell quickly,” Auntie Esi indicated.

Even though there were many parents and guardians in town purchasing items for their children and wards, some traders complained that patronage was far lower than expected.

A trader who sold sandals and only gave his name as Joe attributed the low patronage to the increased numbers of traders who sold school items in the market.

He said when it got to the season for students to go to school, traders who previously did not sell school items changed over to sell those items.

Another trader who sells books, Akosua, said she had not sold a lot of items because most of the books and stationery on the school list were to be provided by the schools.

A parent, Dora Mills, who spoke with the Daily Graphic team said, she bought most of the must-have items for her child weeks before the school placement was released.

She explained that as soon as the BECE was over, she began buying items such as ‘chop’ box, mattress, blanket and personal effects, since she knew prices would go up after the school placement had been released.

She added that the items she was purchasing now were a few specific ones being required by the school.

Another parent, who gave her name as Esi, said the prices of the items were too high, but she had no choice but purchase them.

She said the increases in the prices of some of the items were a deliberate attempt by some traders to make a lot of profit, since it was their “cocoa season”.

“Some traders deliberately increase the prices of the items to make more profit because they know that parents have no choice but buy the items which are must-haves for their children to enable them to report to school.