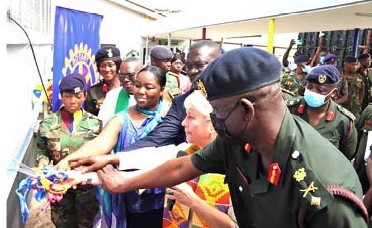 The President of Rotary International, Jennifer Jones, yesterday inaugurated two projects as part of the club’s drive to boost healthcare delivery in the country.

They are the adoption and refurbishment of the Children’s Ward at the 37 Military Hospital and the renovation of the Kokrobite Health Centre Staff Quarters.

Ms Jones, who is on a three-day duty tour of the country, also planted trees near the Weija Dam and the Kokrobite Health Centre, where she also launched a malaria eradication project.

At the inauguration of the children’s ward, Ms Jones commended the Rotary Club of Accra-Airport, saying what it had “created is hope and that’s what a child and a mother need when they come into the facility.”

She said being able to have a place to provide comfort for mother and children was truly a meaningful and impactful work.

“Maternal and child health is one of our primary areas of focus,” she said.

The Commanding Officer of the 37 Military Hospital, Brigadier General Azumah Bugri, said the club changed the ceiling, painted the ward with bright colours, supplied bright coloured bedding, provided television sets and air conditioners, a children’s library area stocked with toys and books and a resting area for waiting mothers with furniture and lockers.

The District 9102 Governor of Rotary International, Victor Yaw Asante, said Rotary was a service organisation working in and with communities to improve the lives of people and lauded the Rotary Club of Accra-Airport for the work done.

The past President of Rotary Club of Accra-Airport, Afua Ababio, gave an overview of the project which was conceived in 2018.

At Kokrobite where Ms Jones was enstooled as a development queen mother with the title Naa Osa Manye (Naa Ansaa I), she described the project as incredible to improve upon health care, which was a fundamental human right, in the area.

The Principal Physician Assistant at the Kokrobite Health Centre, Jerry Nunoo, said the four-bedroom facility would help to boost the morale of the staff as it would help keep them closer to the centre for effective healthcare delivery.

The Rotarian President of Weija-West, Vincia Bouckinda Bouckinda, said the club was able to execute the project although “the journey was far.”

The President of the Rotary Club of Accra East, Andrew Ofosuhene, also expressed his excitement with the project.